Language Barriers and Lettering in Rutu Modan’s The Property 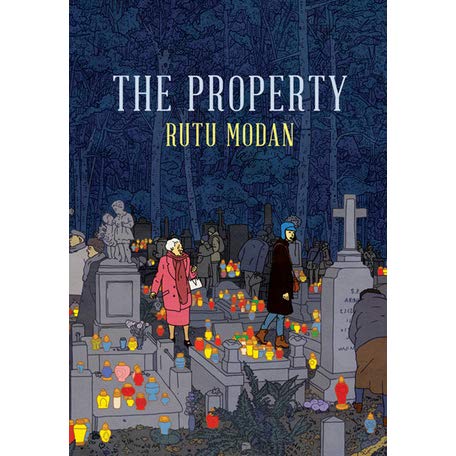 Rutu Modan’s The Property is one of my favourite graphic novels. There are many things to love about it – the pacing, its unique version of the ligne claire style, gorgeous soothing colours, etc. What intrigues me most about this comic, especially after a recent reread, is its way of depicting language barriers through different styles of lettering.

The Property is about a grandmother (Regina) who travels home to Warsaw, Poland, several decades after WWII. Tagging along is her granddaughter (Mica), and a family acquaintance. Slowly, Mica uncovers her grandmother’s secret, tying one family property to the true paternity of her recently deceased father (Regina’s firstborn).

At its very core, The Property is about secrets, about what is kept quiet or revealed. How Rutu Modan portrays secrecy is really interesting: rather than reveal information through clear-cut exposition, it is unfolded through natural dialogue between the characters. However, the distribution of information isn’t equal – a character may know something the other doesn’t. A character’s privilege to certain information is limited by their fluency in a language.

This comic has a multilingual cast. The characters collectively speak Hebrew, English, and Polish – each of them with varying degrees of fluency in a certain language. Portraying multiple languages in a comic with multiple POVs is a logistic challenge, especially if characters code-switch plenty.

Personally, for The Carpet Merchant, I colour-coded dialogue bubbles to reflect the language a character is currently speaking. Green for French, blue for English, pink for Spanish, and white (the default bubble colour) for Turkish, which is the default language of TCM’s diegesis. The only con of this approach I know is that I’ve to be aware of how colorblind readers may read these colour-language cues, but that’s a matter of adjusting the value for them. Mileage may vary. 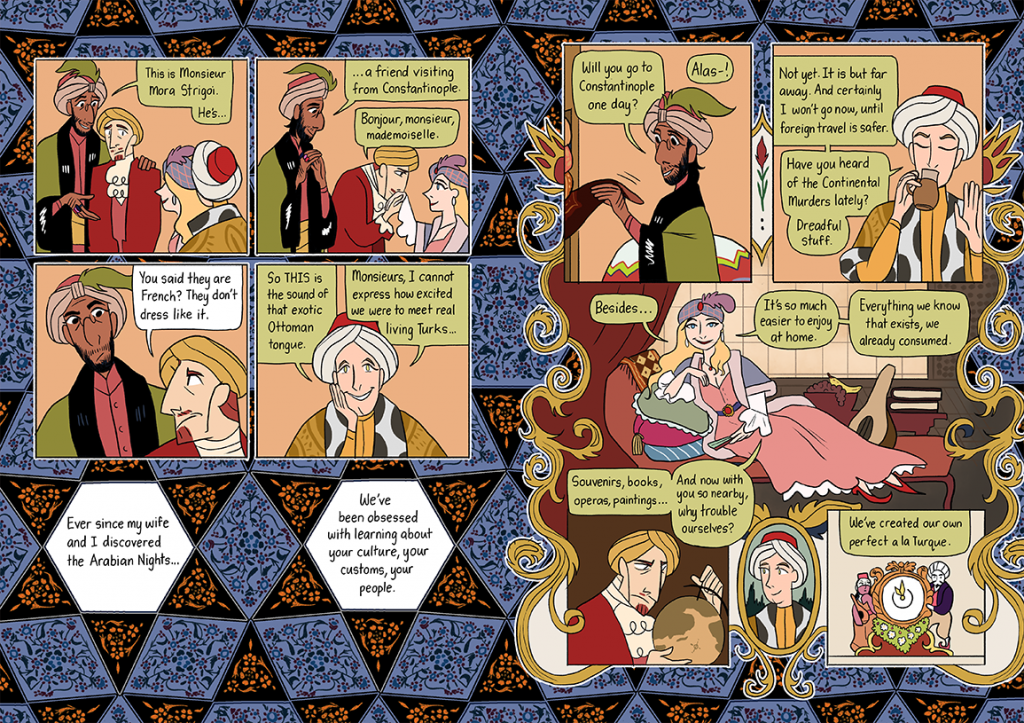 Mora Strigoi makes a snarky comment in Turkish to Zeynel. The Frenchman only hears pretty-sounding exotic words, having no clue that he’s the butt of the joke, and further exposing his surface-level appreciation for Turkish culture.

And most interestingly, scribbly lines (which I’ll call “worms”) for a language the POV character doesn’t understand. In this page, we’re in Mica’s POV. 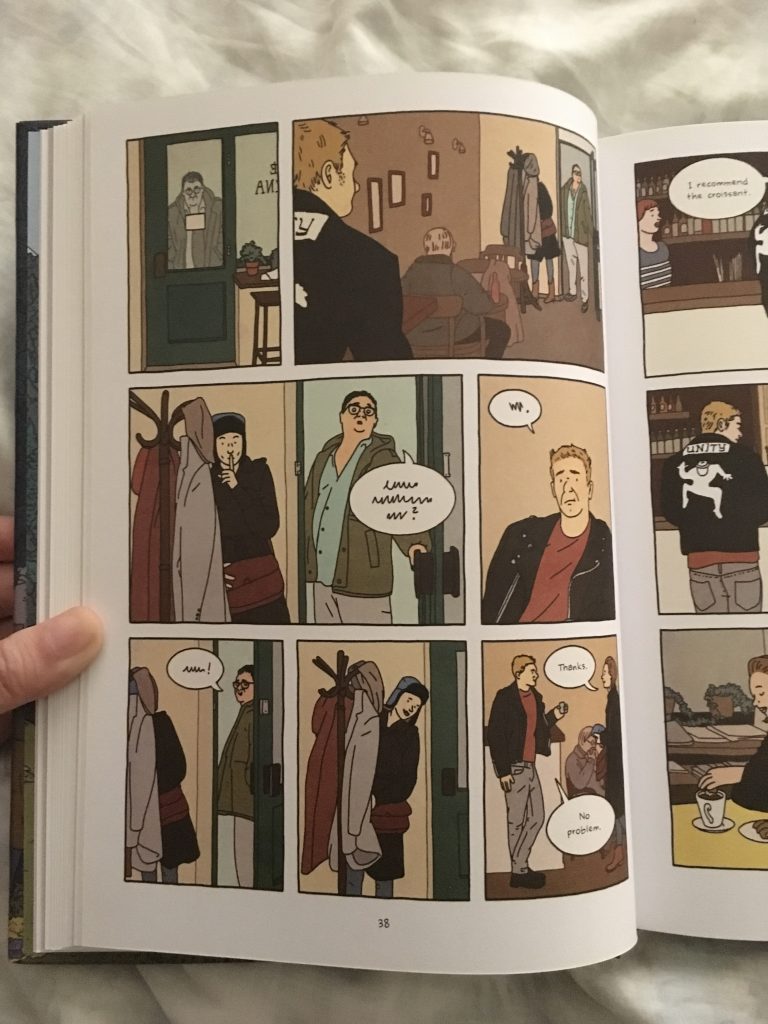 Mica runs away from her annoying uncle. Her uncle asks a stranger in the cafe where she is (they speak Polish). Meanwhile she signals to the stranger to let her keep her hiding spot. She thanks the stranger for maintaining her secret, in English. This page is a clear example of how The Property is a story about secrets, and how it uses lettering as a core narrative device.

The worms pop up whenever the granddaughter, Mica becomes our POV character and ‘hears’ Polish, which is a language she can’t understand. Polish is her grandma Regina’s mother tongue, which Regina speaks for two purposes: to connect with her past and heritage, and other her granddaughter. Polish becomes the language of secrets.

The story switches POV characters multiple times in the story, even though Modan never uses chapter breaks to delineate the POV. But never once did I get confused about whose POV I was in, thanks to Modan’s pacing, use of page turns and panel transitions, and the different lettering styles.

Here is an example of how Modan uses lettering and panelling. 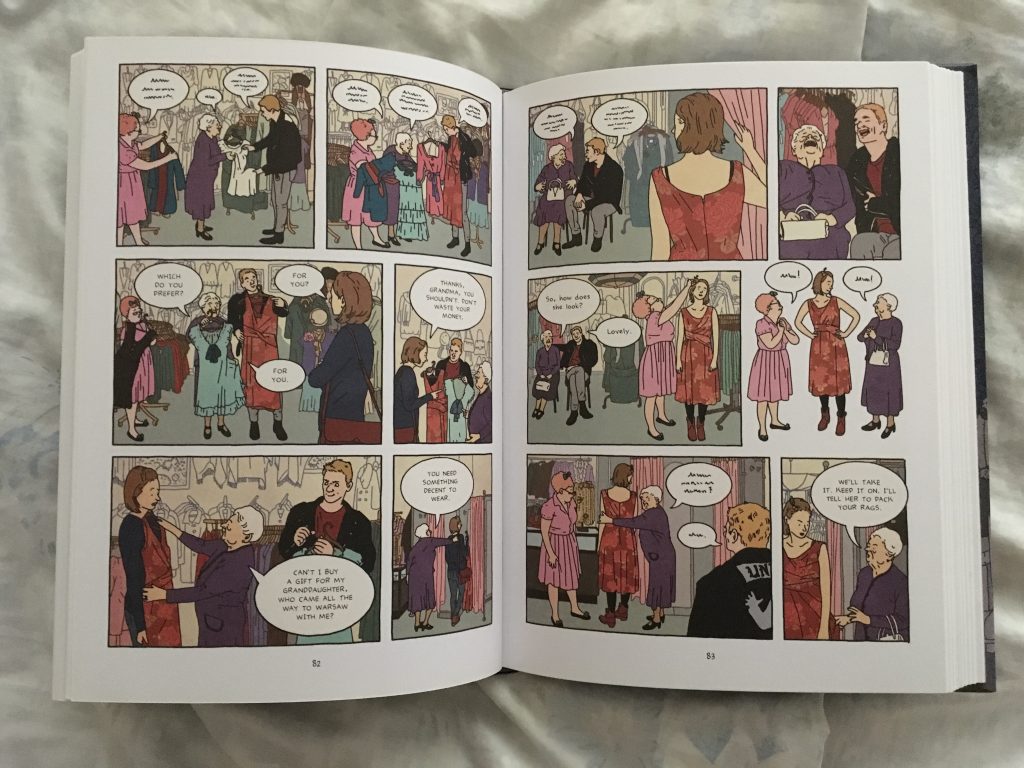 Within two pages and 12 panels, the POV shifts three times (Mica – Regina – Mica) without losing the reader, despite the fact that three languages are being understood here in diegesis (Hebrew, Polish and worms), plus one outside the diegesis (the reader’s language…in this case, English). It’s narrative showmanship that I think only works (or is possible) in comics. Note how this switching of POVs through language creates a sense of Mica being othered, through the principles of group inclusion and exclusion, by her inability to access Polish. 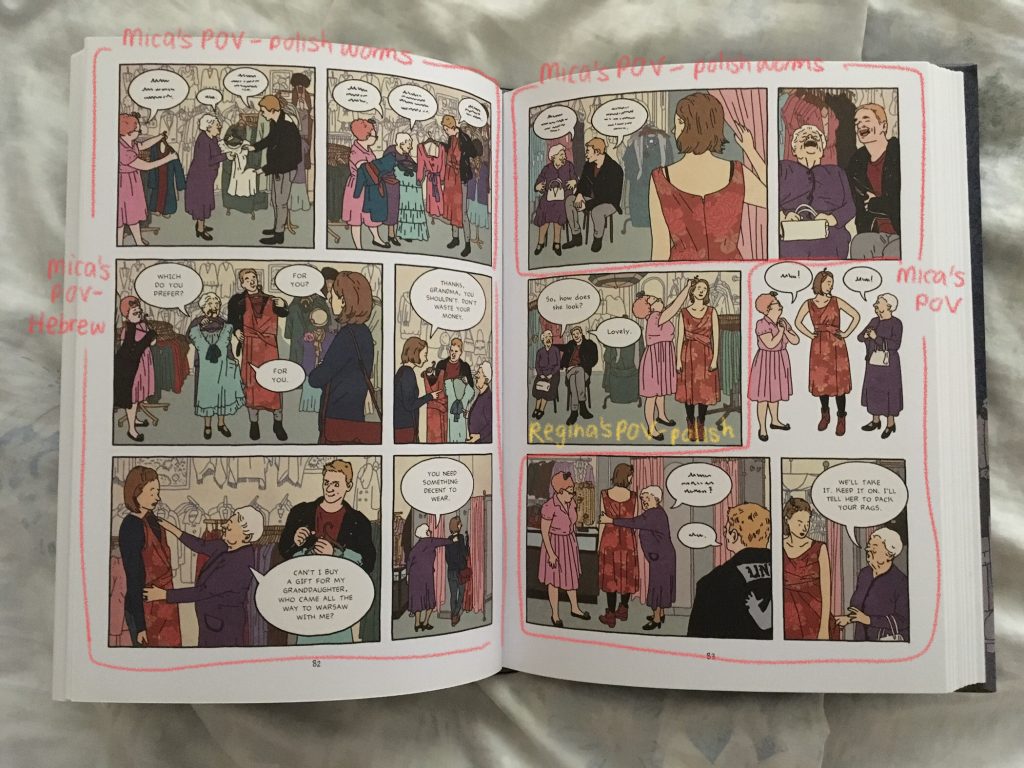 In prose, using multilinguism as a narrative device may work, but it loses the advantage of having the artwork within the panels to efficiently guide the reader as POVs are switched. Modan’s style is ruthlessly efficient, and it is felt in her art, in what moment she chooses to include or exclude. That is how Modan is able to make the transition of POV feel so seamless. Art picks up the weight where dialogue can’t, presenting multiple information at once alongside the dialogue without taking attention away from the dialogue itself.

In film, this narrative device confuse the audience, because the camera will have to break so many rules, not to mention having to audibly switch between three languages plus one (Hebrew, Polish, the audio version of worms, and subtitles in the viewer’s language). Film rarely has characters speaking multiple languages at once, preferring instead to have characters magically speak and understand a single universal language, usually English.

This translation of The Property uses English as a single universal language, but it is meta-textual. It’s for the reader’s benefit. The characters in the comic don’t speak a single universal language and it is their multilingualism is what drives and pushes the story forward. Multilinguism is what gives Regina the power to build barriers around Mica, to keep Mica away from knowing her grandmother’s secrets and consequently, her own heritage. In turn, disempowering her granddaughter, but Mica is determined to get around those barriers, even if she has to use Hebrew and English to do it.

It’s really cool to see lettering is being used this way as the core narrative device, rather than just a practical device to provide tone, voice and cadence. I’m not sure when multilingualism will ever be used in my own work again, but The Property gives me inspiration for any future use.

Question Of The Post: How do you portray multiple languages in your comic?

RIBU analyses storytelling within the visual language of comics. Run by Reimena Yee.