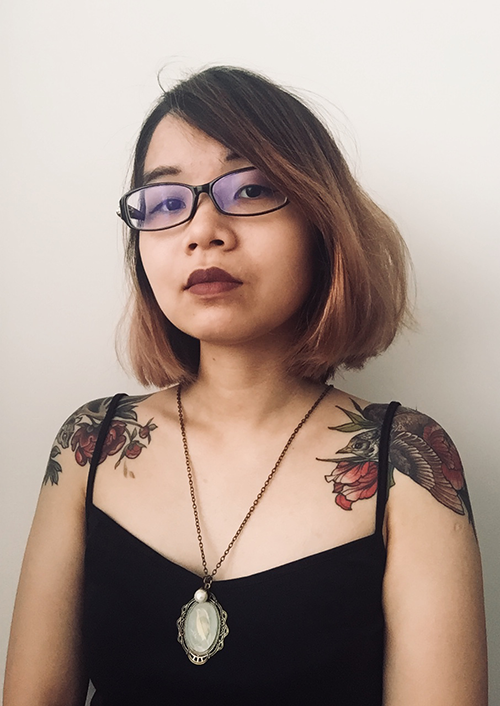 Author-illustrator of
The World in Deeper Inspection

The Carpet Merchant of Konstantiniyya

My Aunt is a Monster

Alexander, The Servant & The Water of Life

I'm a strange and fancy graphic novelist and illustrator from Kuala Lumpur, Malaysia. I'm currently based in Melbourne, Australia.

I had always drawn and written stories since a very young age. My school exercise books were littered with stories of characters (a mix of original and borrowed characters from TV and books) bonding and going on adventures. When I was 9 I started my first long-form comic strip series, Callupish, that lasted for 3 years. Back then I aspired to be a newspaper comics artist, since what I used to read mostly back then were comics strips (Garfield, Calvin and Hobbes, Zits, etc) and Archie Comics.

I started establishing an online presence at around 11 to 12, on Neopets.com. That introduced me to the larger community of artists from all over the world with varying skills, who shared a passion for drawing and making stories. Around the time I was going through a transition. I was moving away from my newspaper comics ambition, instead aiming for a practical career in the sciences with a side gig as prose author.

Though I still maintained an active interest in drawing, since I always made things for the pleasure of making something exist, for self-expression and self-improvement and finding joy amidst the stress of studying… I actually wanted to be a prose writer more - someone who tells stories using only words. Despite having a knack for comics, I didn't make the connection that I could use comics to tell the super grand, super complex stories I suddenly wanted to write. My idea of comics at that time was all Archies and Garfield and basically, all those comics in newspapers and magazines, which were short, simple stories in a simple style. So I didn't think that comics were "big enough" to handle my writing ambitions. And for a year I separated my ambitions for drawing, and my ambitions for writing.

When I was 14 I discovered webcomics that are done by independent creators and self-published online, with nuanced stories, compelling characters, big worlds, beautiful visuals, told with both art and words. And I realised that actually, comics have always been big enough, and bigger. Just that I was looking at it from a not-so-informed-yet perspective. One thing I also realised was that all of the stories I write rely so much on imagery… and obviously, comics solves that problem.

The one that really opened my eyes to the possibility of comics was Hanna Is Not a Boy's Name by Tess Stone. Its experimental page layouts, extensive use of typography and strong graphic design that were integral to the storytelling inspired me to make comics the way I do.

But for a long time I still wasn't set on becoming a comics creator, or a writer, or an artist. This was more like a side thing for me, something I do because I was interested and loved doing and was good at doing. What I was doing in my secondary years was, you know, the usual, straight As in all exams, get into the Science Stream, do A-Levels and study in an overseas university so I can get a fancy job later. I did all that. After SPM, I debuted The World in Deeper Inspection in 2013. Later, I went on to a BSc in Psychology at the University of Melbourne, with the intention of becoming a researcher who integrated psychology into faith practices.

Until very recently I was balancing between studying science subjects and improving my drawing and writing. I loved doing both, but obviously storytelling came most naturally to me, and the studying has always been in service of my real calling of telling stories. I was about to graduate when I finally understood this, and I have been very lucky that my career worked out. It was after 10 sustained years of being online, moving through websites and social media, even before Facebook and Twitter are as big as they are now, improving and improving my craft, and being part of the community, and being in the right place at the right time. And now I get to do this for a living and support my family.

CRAFT, ART AND OTHER RELATED MISCELLANY

This isn't as fun or exciting as expected. I actually tend to do a lot of what looks like nothing. I wake up at 10 am, I check my Twitter and email, and I do one of two things: I create or I consume. When I create, I draw or write. When I consume, I read books, do research, watch movies, etc. I do this work in the late morning and at night after dinner. The afternoon and evening are random - it can be anything or nothing. I sleep at 1 or 2 am. Over time, I end up with a book or a drawing.

Are you available for...

An interview: Yes, over email.
A panel, workshop or author appearance: Depends on my schedule and the timing of the event (I am based outside of the US). Please ask over email. I may require compensation for travel, materials and time.
A portfolio review: Yes, but I require financial compensation.

Who is your agent?

What are your tools?

Where can I find out more about your craft and your creative process?

My blog is the place for it. 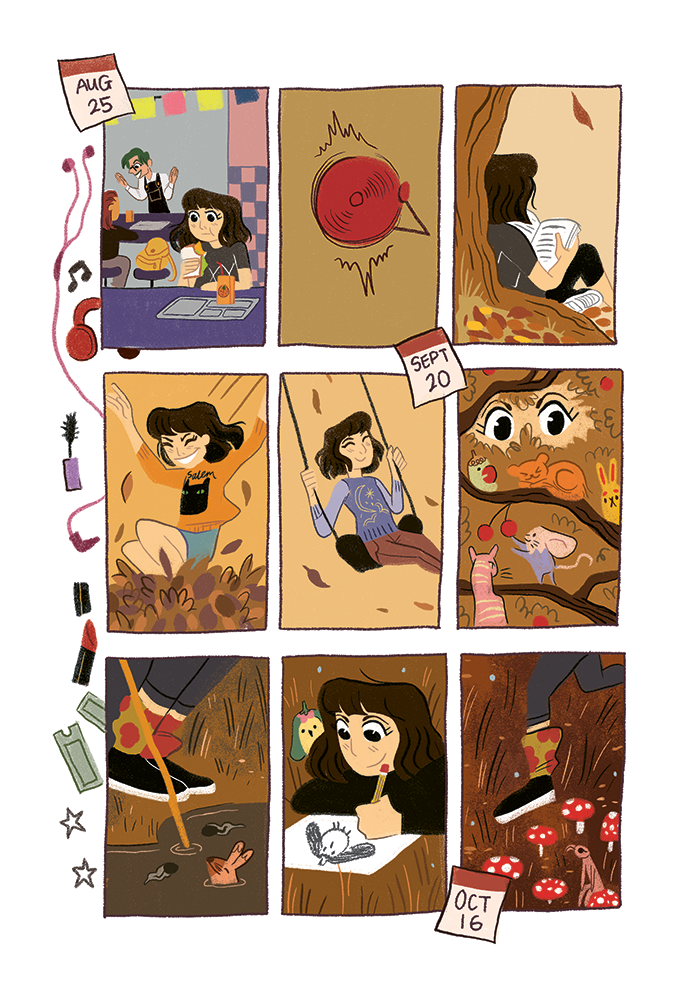 What are your early influences?
Neil Gaiman, particularly The Graveyard Book; Dave Mckean's comic experiments; The illustrations of Chris Riddell; Hanna is Not a Boy's Name, by Tess Stone; Neopets; Frakenfran, by Katsuhisa Kigitsu; The Rabbi's Cat, by Joann Sfar

What are your influences now? How do they inspire you to make the art you do?

I'm inspired by the world and all that contains within. I love history and art history, and the things people have made with their hands across civilisations. I love science, because it teaches me how the world works, and that there is so much to pursue and be fascinated by, whether it's the small or big things. This scholarly interest in existence, of being a person interested in their surroundings, is what influences me to look deeper, to learn about how and why we live, to break and reshape the way we see our past, present and future. All the work that I make is an expression of this pursuit of knowledge.

What authors/books/media are your inspiration?
Comics:
Through the Woods (and other webcomics), by Emily Carroll
Beauty, by Hubert and Kerascoet
Wandering Island, by Kenji Tsuruta

Books:
Captain Corelli's Mandolin, by Louis de Bernieres
The House at the Edge of Night, by Catherine Banner
Anything written by Alexander McCall Smith
The Epic of Gilgamesh
The Odyssey, Emily Wilson translation
The God of Small Things, by Arundhati Roy

The thoughts and craft of Ursula K. LeGuin

All of Josh Groban's music, 20 years and going! 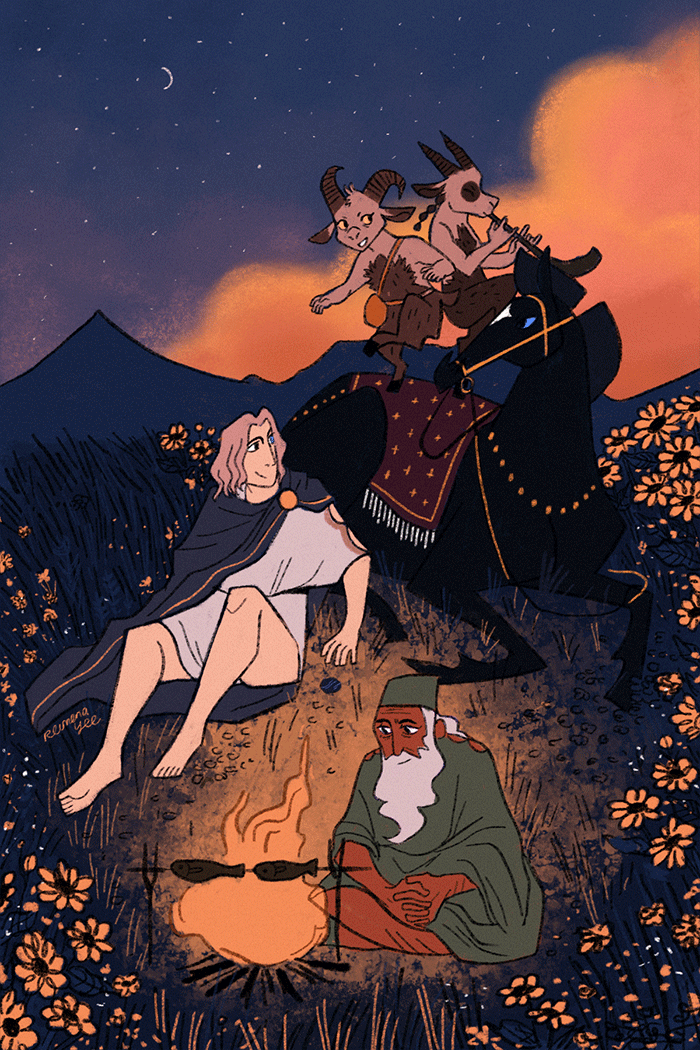