Come, children, and mothers of children;
weavers of wonder, wards of warriors.
Hear me now as I recite
A story, of a lifetime faraway.
Listen. 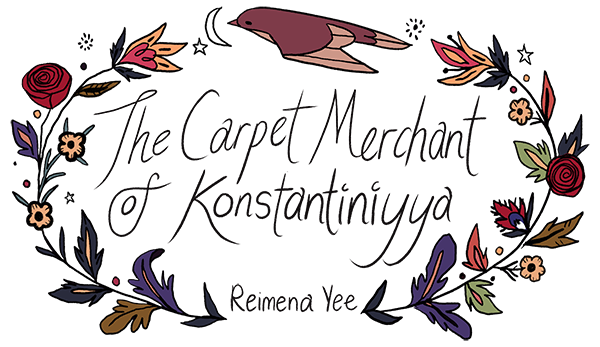 A two-volume Eisner-nominated graphic novel set in 17th century Istanbul and 18th century England, about a carpet merchant's reconcilitation with faith, love and home in the aftermath of his death by a vampire.

A magic realist, historical epic with a modern, satirical take on Gothic fiction and the literary vampire genre.

A Fragment of a Turkish Tale

Zeynel and Ayşe are a pair of happily-married carpet merchants in 17th century Ottoman Istanbul. While on a business trip, Zeynel becomes a Good Samaritan to a lost traveller in red. He wakes up the next day discovering, to his horror, that he is the victim of a blood-sucking djinni. Now a djinni himself, he returns home desperate to reconcile his new life with his faith and former human identity, afraid to leave behind the woman he loves.

A Modern Karagöz and Hacivat

70 years later in England, Zeynel is at the centre of a fad for all things Turkish, grappling with the meaning of home as it is distorted by Orientalism. Meanwhile, he and his young English friend must deal with the return of Mora Strigoi — the ancient Roman vampire responsible for Zeynel's death — who has come to seek forgiveness.

Read the original webcomic for free.

The ebooks below collect both volumes of The Carpet Merchant as originally published on alcottgrimsley.com.
The remastered final edition (trade and ebook) with updated artwork and lettering is available through my publisher, Unbound. 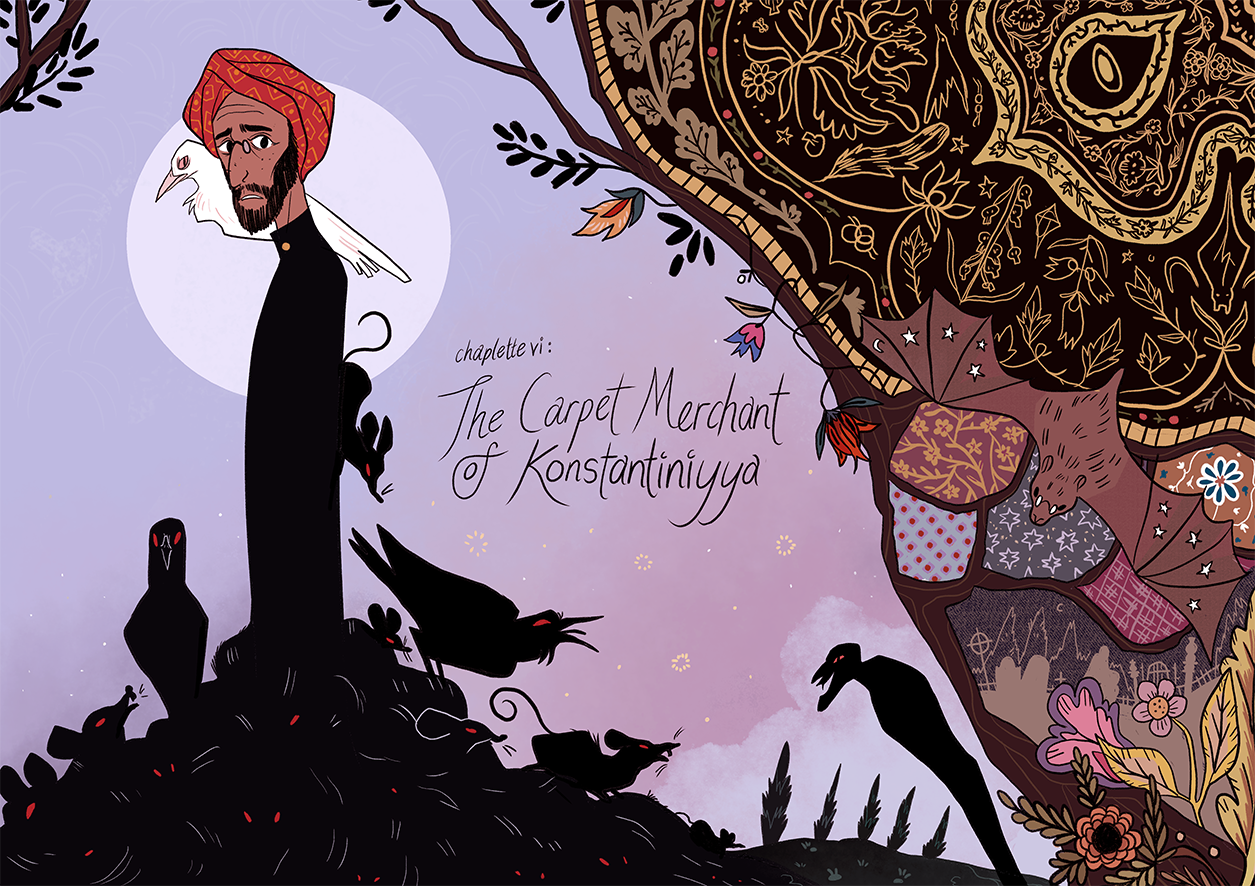 Ayşe is a small town Anatolian girl with big dreams. On her quest to secure marriage and migrate to the capital, she meets Zeynel, the accomplished son of a highly-esteemed scholar family. Unlike Ayşe who is confident in herself and her ambition, Zeynel is insecure — pressured to live up to the expectations and desires of other people. As they get to know each other better, they discover that their meeting is perhaps more than just chance. 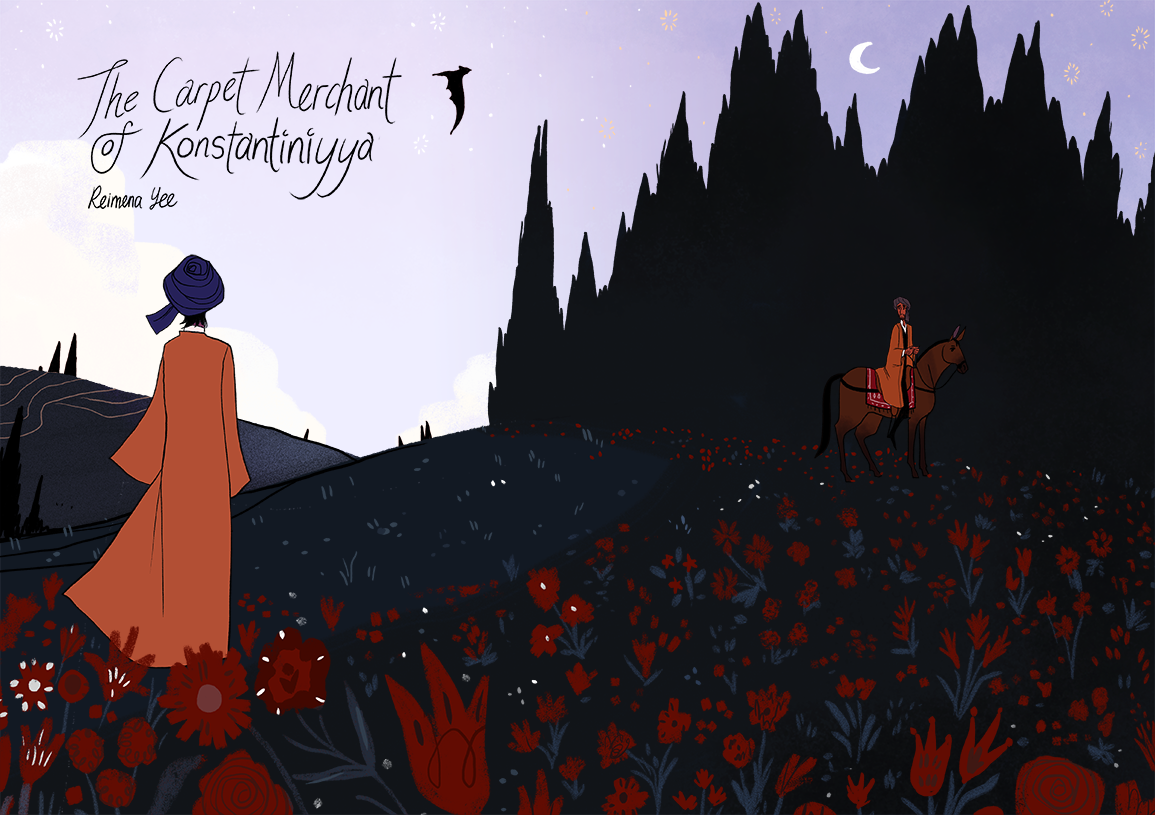 25 years later, Zeynel is the happily-married husband of an amazing and successful carpet merchant, co-owning one of the biggest workshops in Istanbul. During a business trip, he plays the Good Samaritan to a mysterious traveller in red… which turns out to be a mortal mistake. Forced into an unwilling transformation, he must reconcile his old identity with his new vampiric curse, and make sacrifices to protect the people he loves — but that means saying goodbye to Ayşe, the woman who forms his entire world. 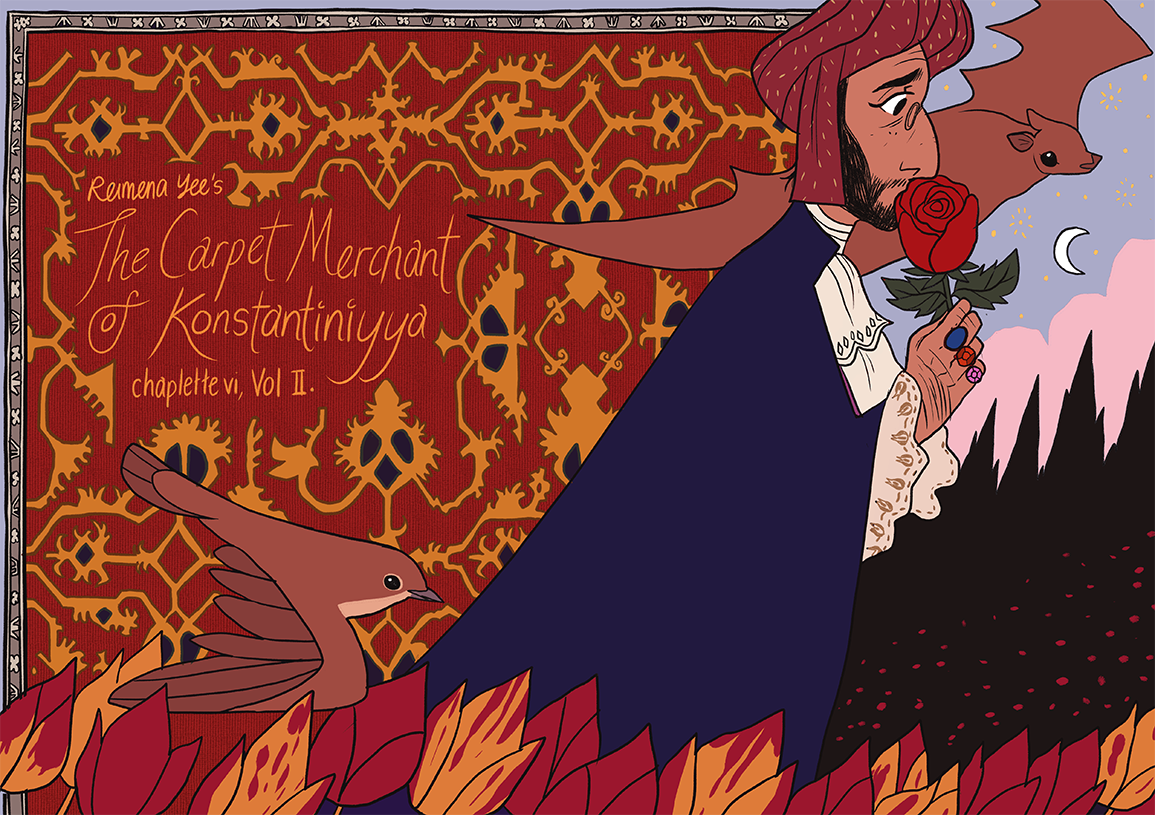 70 years have come and gone since Zeynel left home for an endless pilgrimage. By invitation of a young English friend Alfred Grimsley, he moves to a quiet town in Southeast England. During the journey, he muses about his family's history, his love for stories, and Ayşe's legacy... unaware of the danger in pursuit of him. 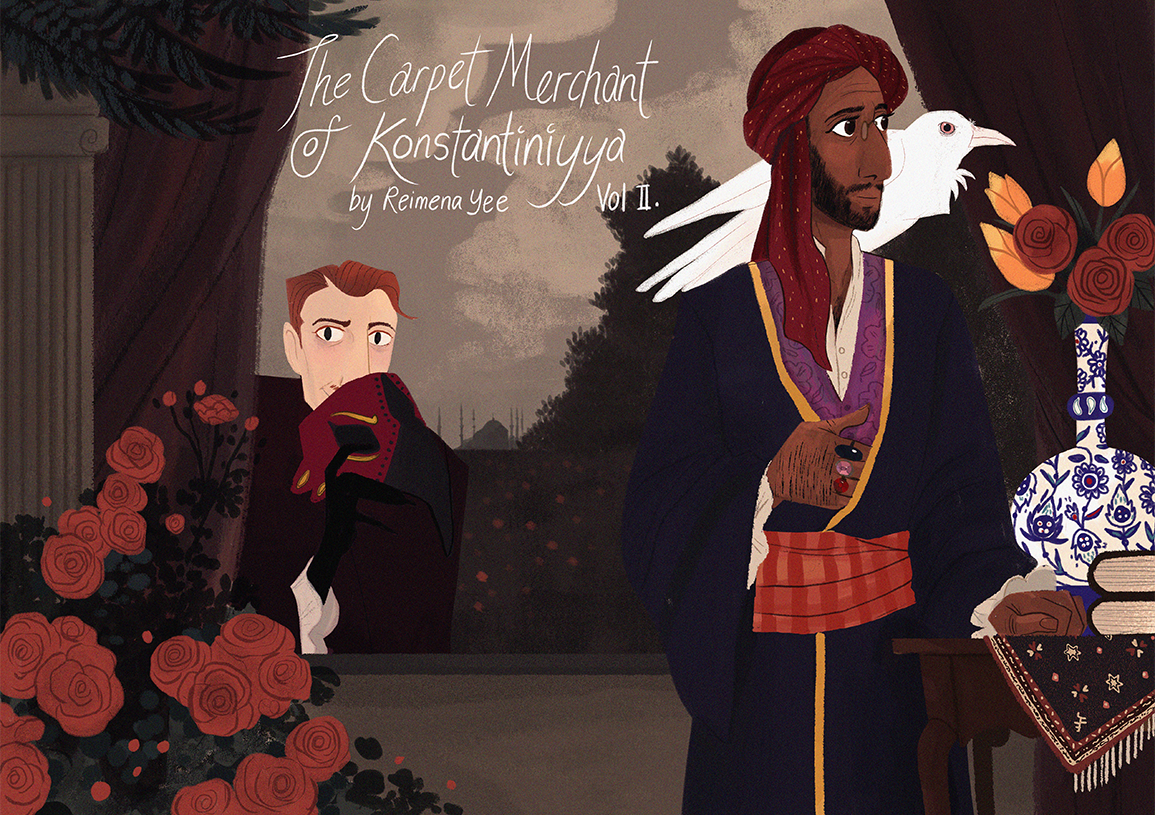 Now settled in this strange English land, Zeynel finds himself the centre of the latest fashion for all things Turquerie. He is surprised to find the vampire responsible for his death — Mora Strigoi — at his door begging for his forgiveness. As Zeynel and Mora struggle to make sense of each other's differences, Alfred Grimsley uncovers a trail of blood made by a mysterious serial killer, and makes the terrifying discovery that it ends at the doorstep of his closest friend, Zeynel. 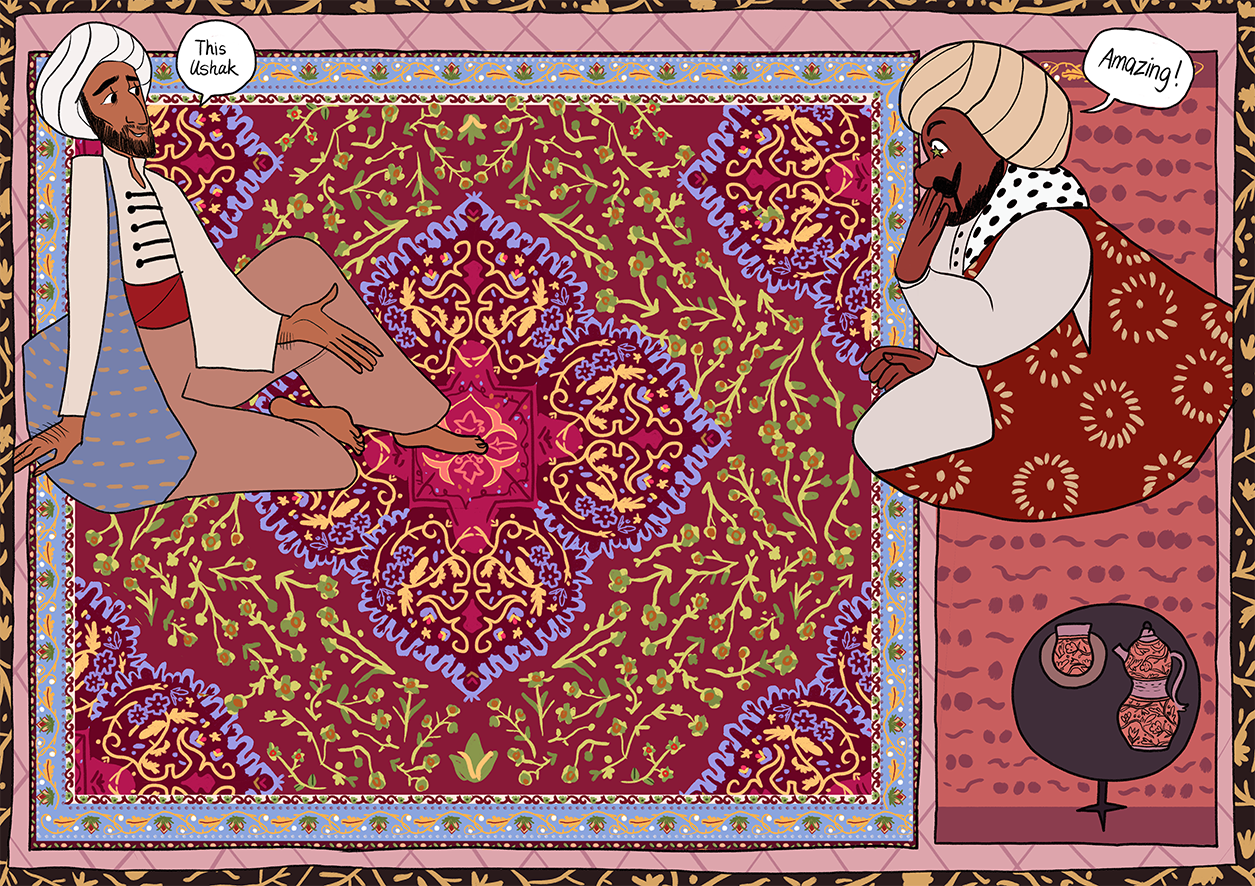 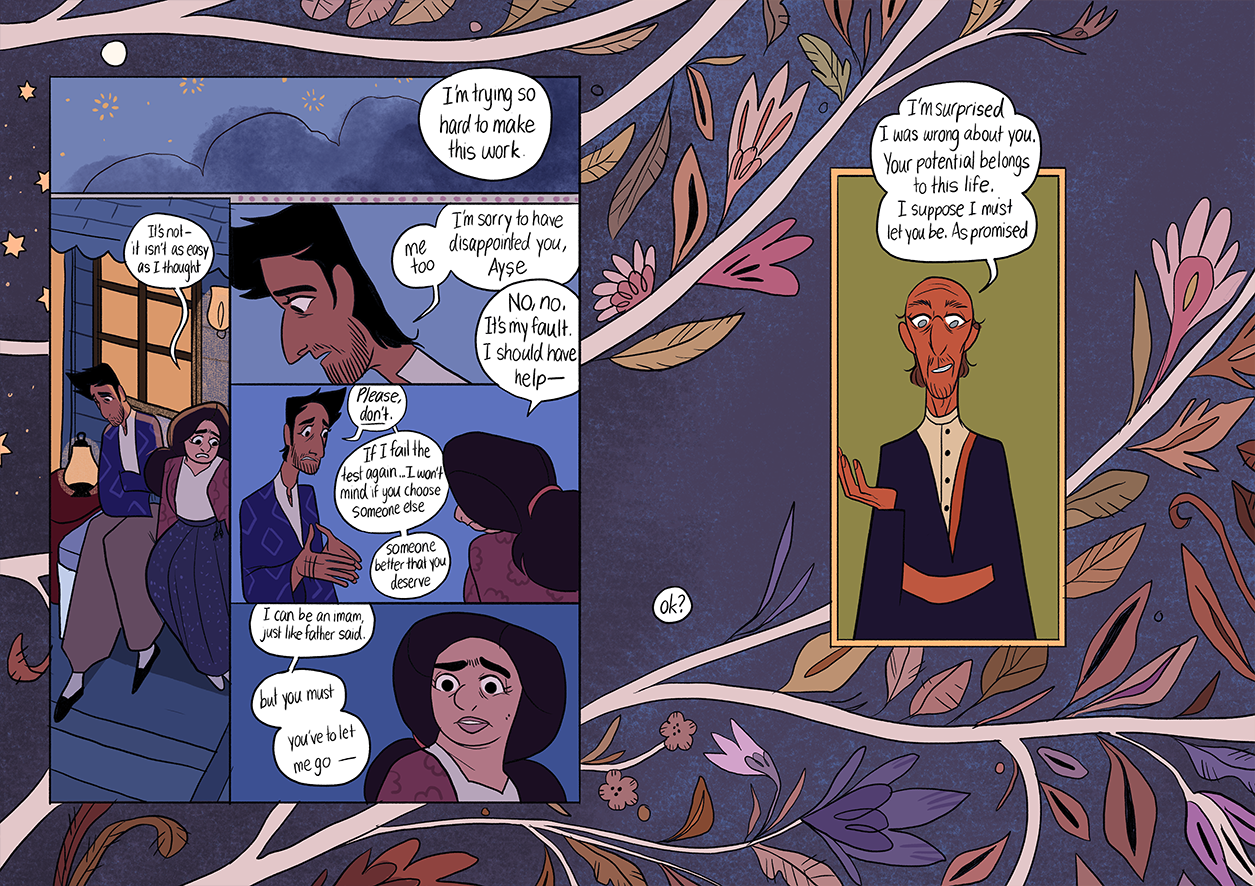 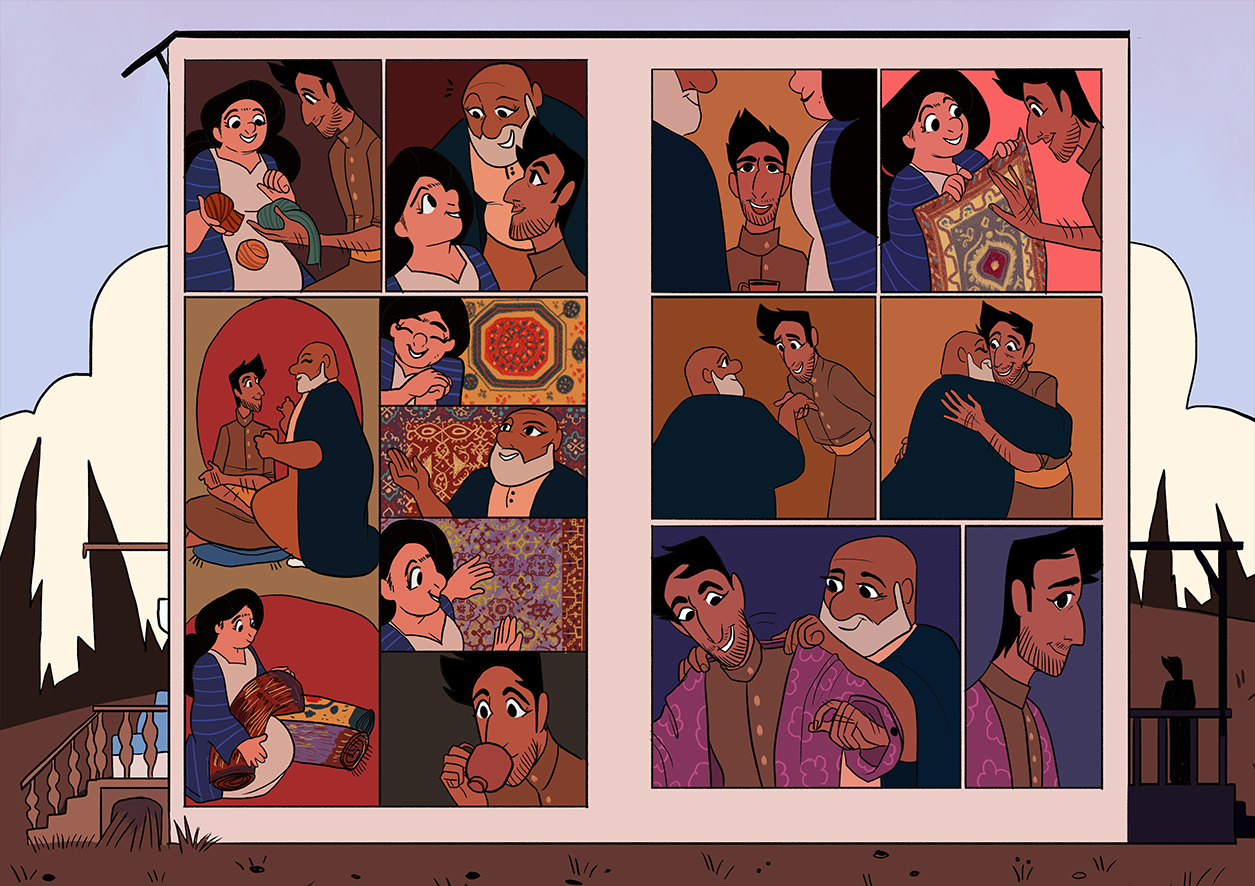 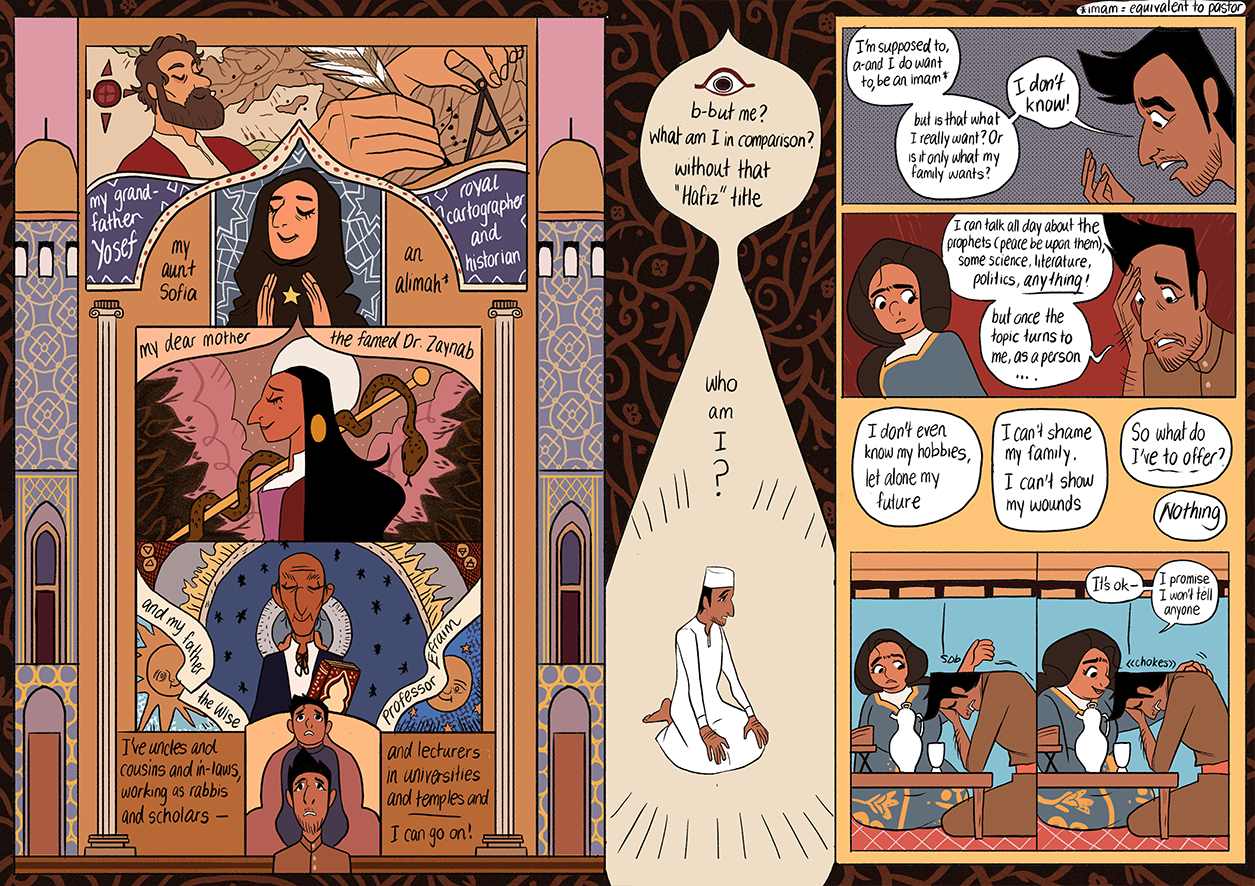 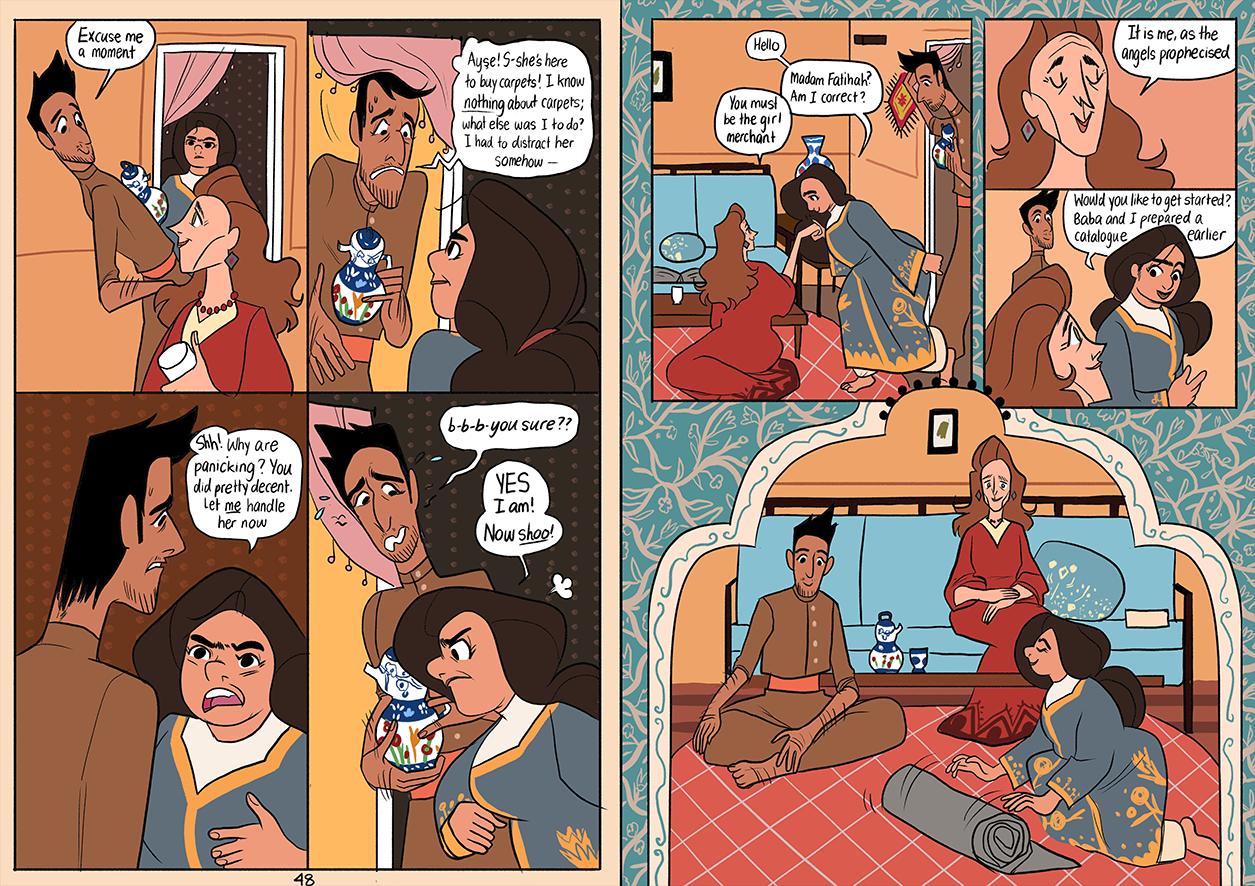 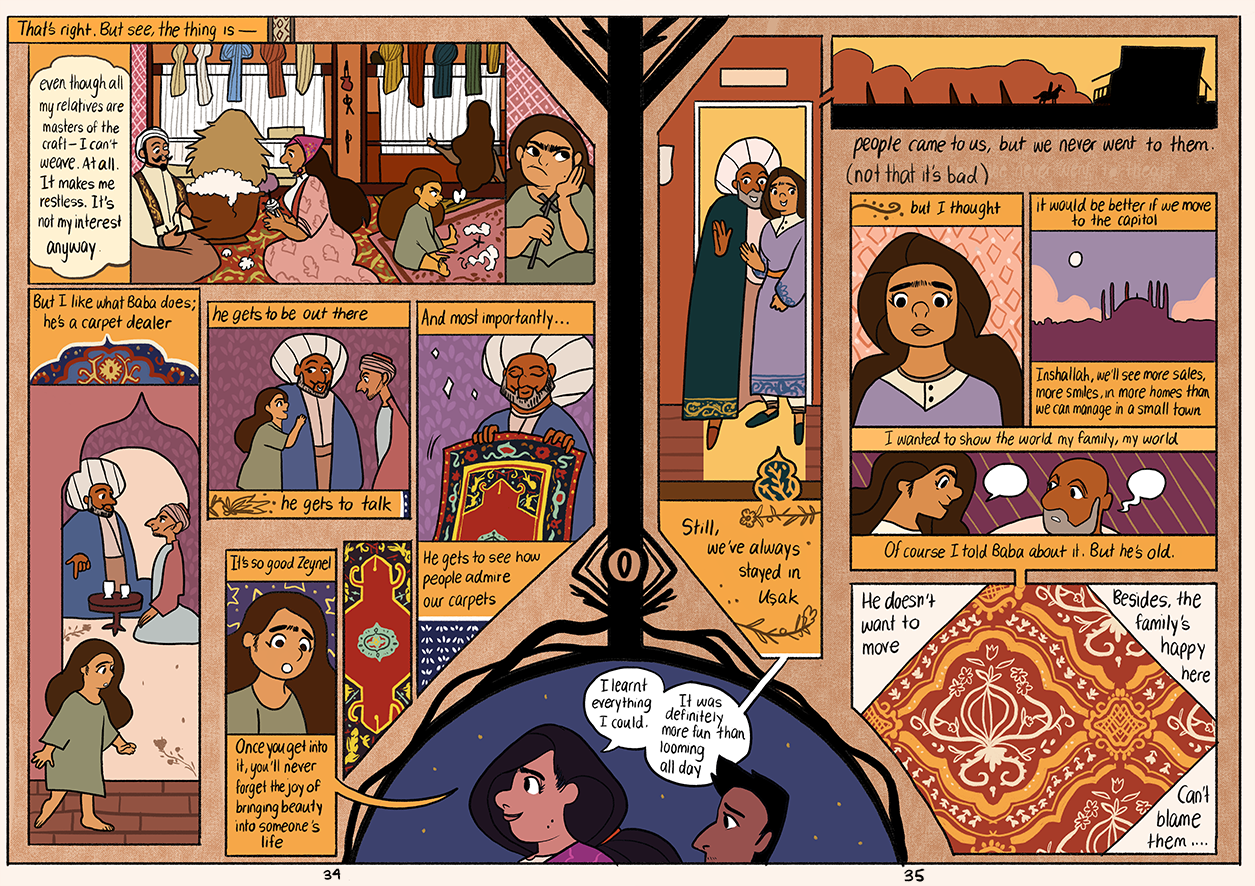 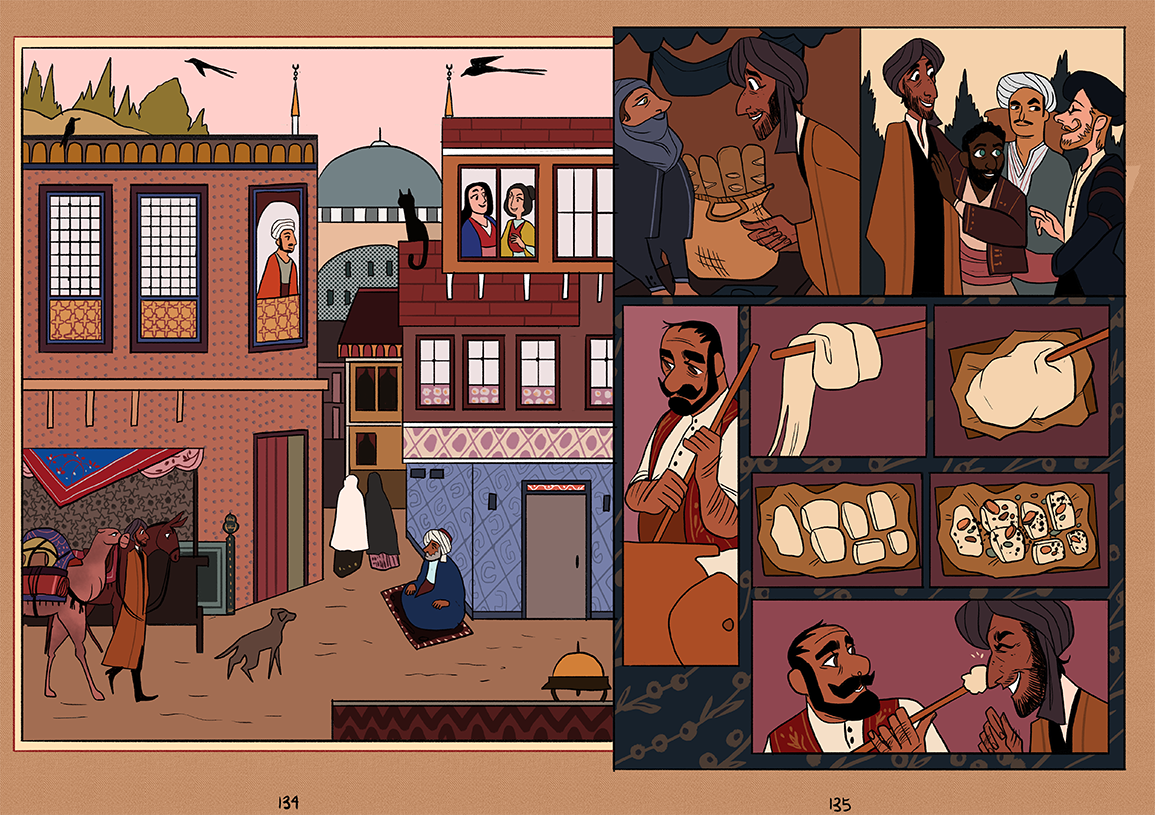 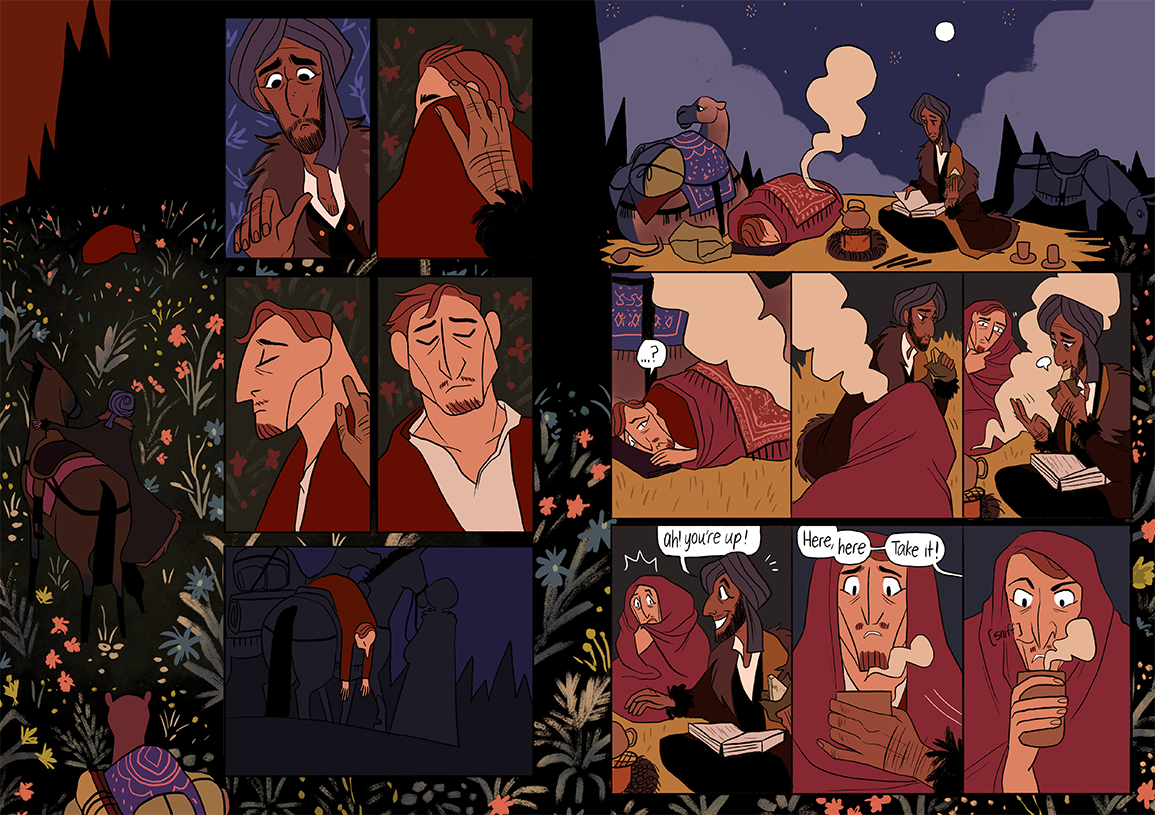 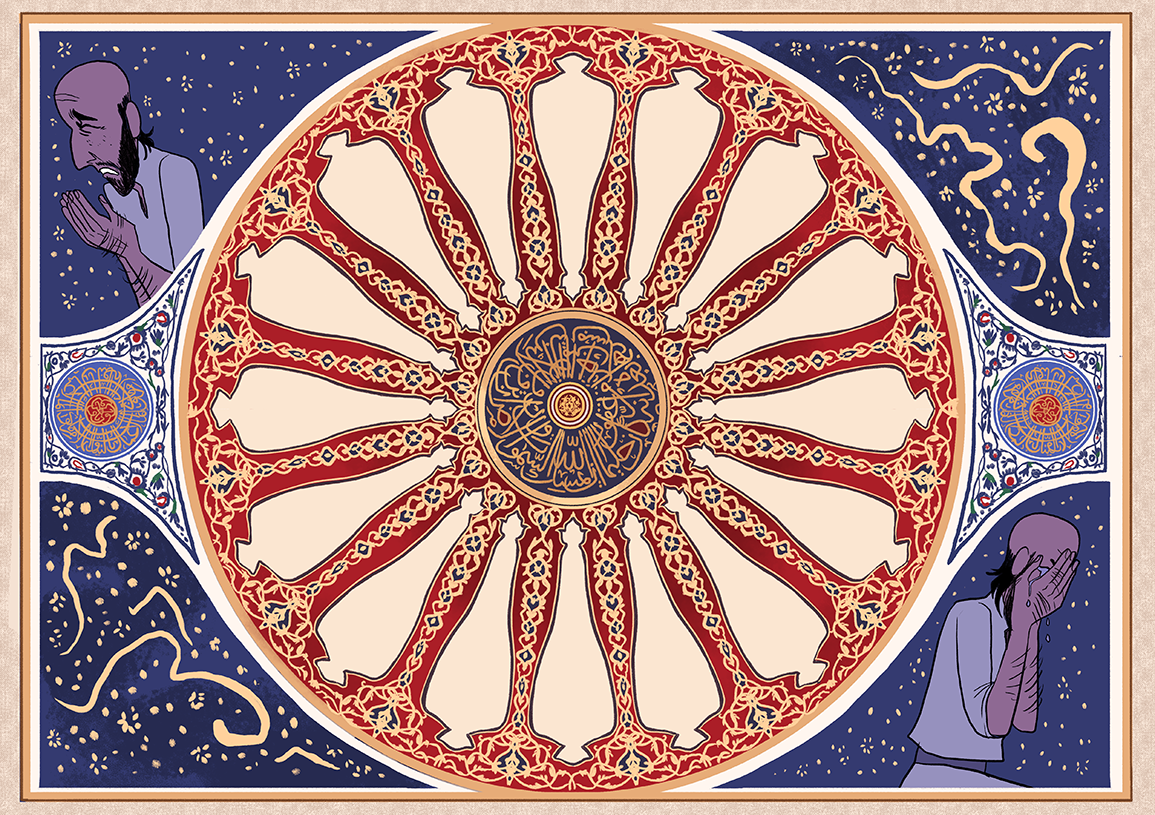 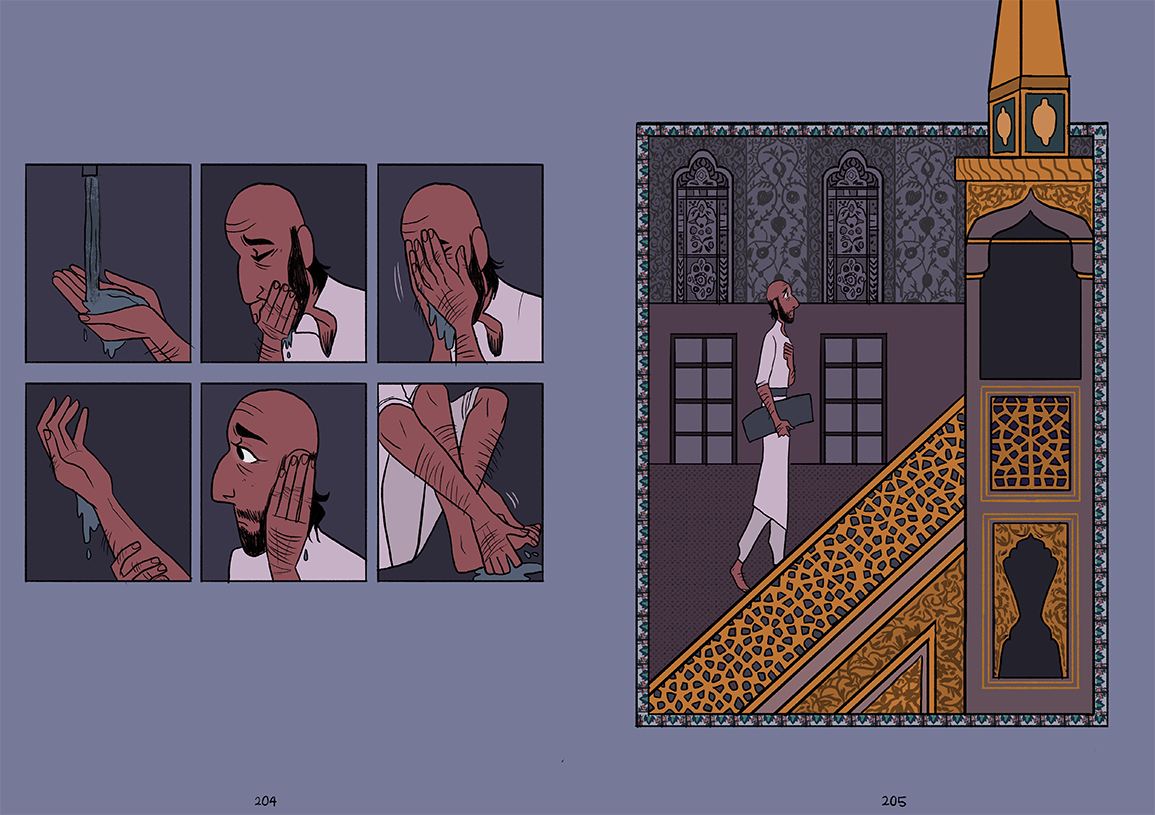 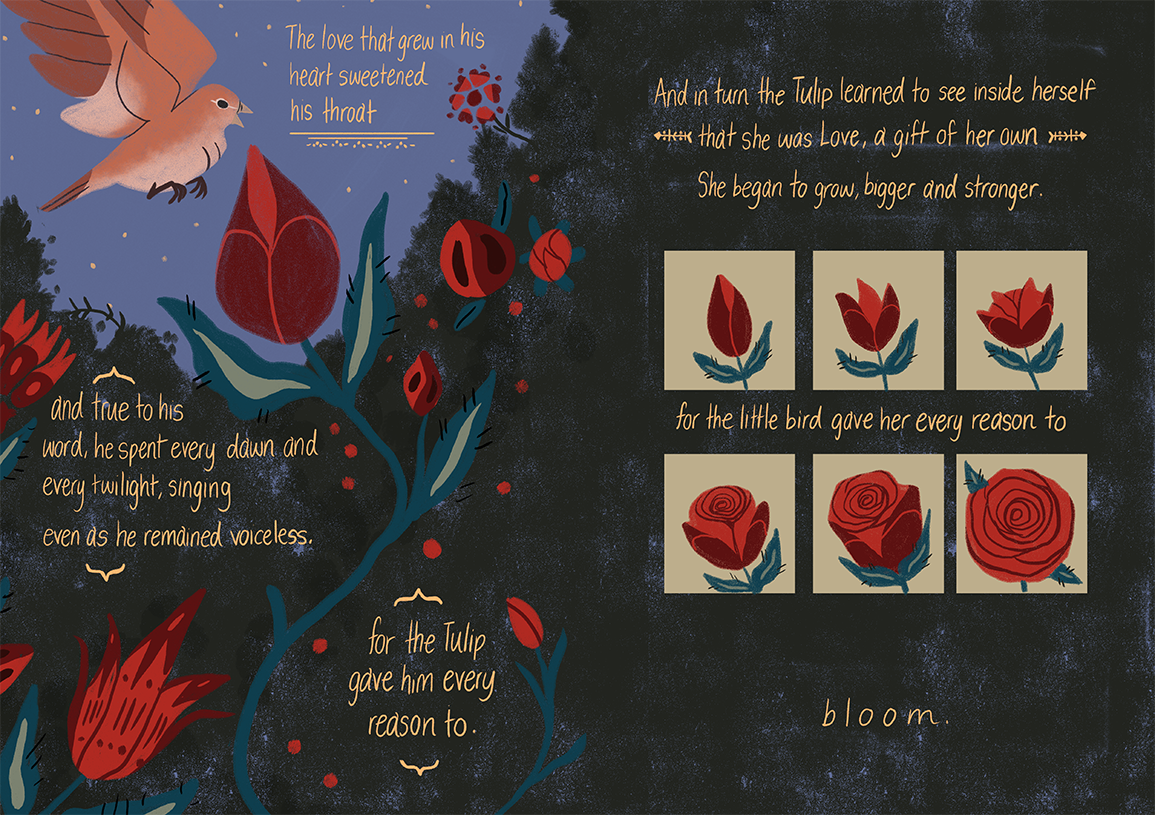 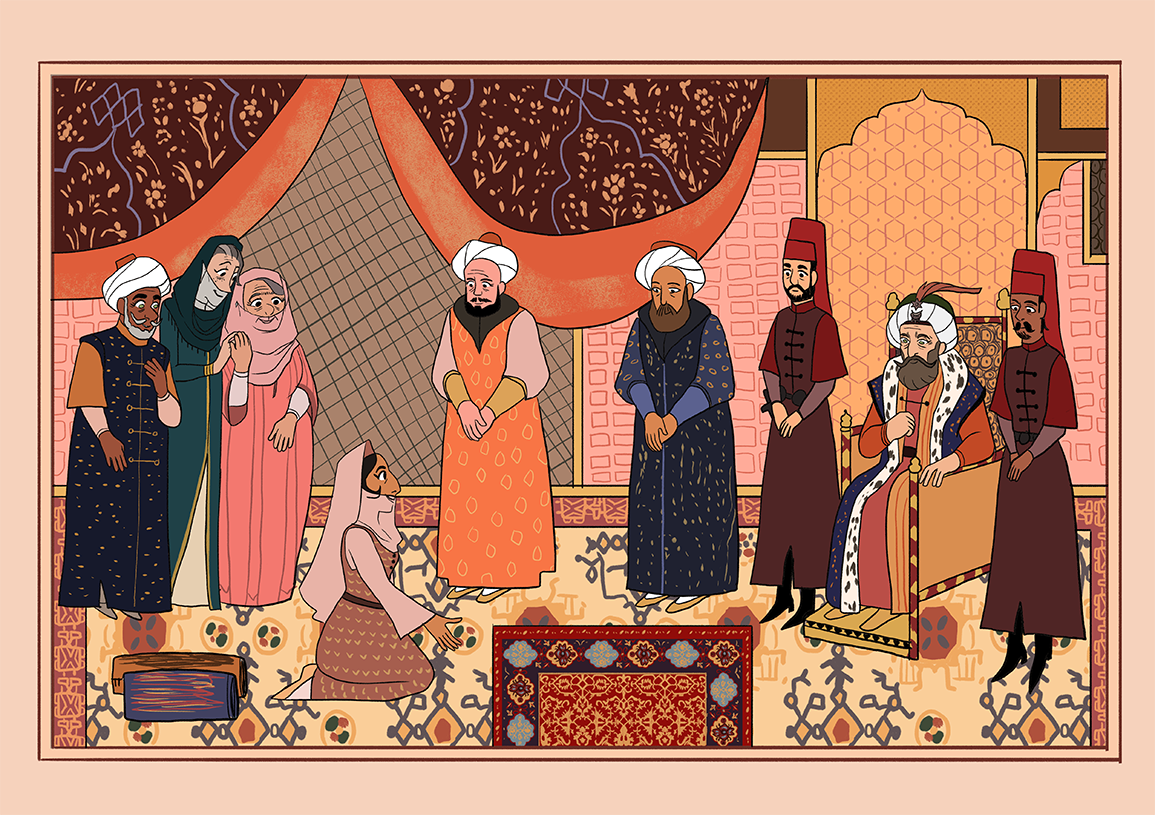 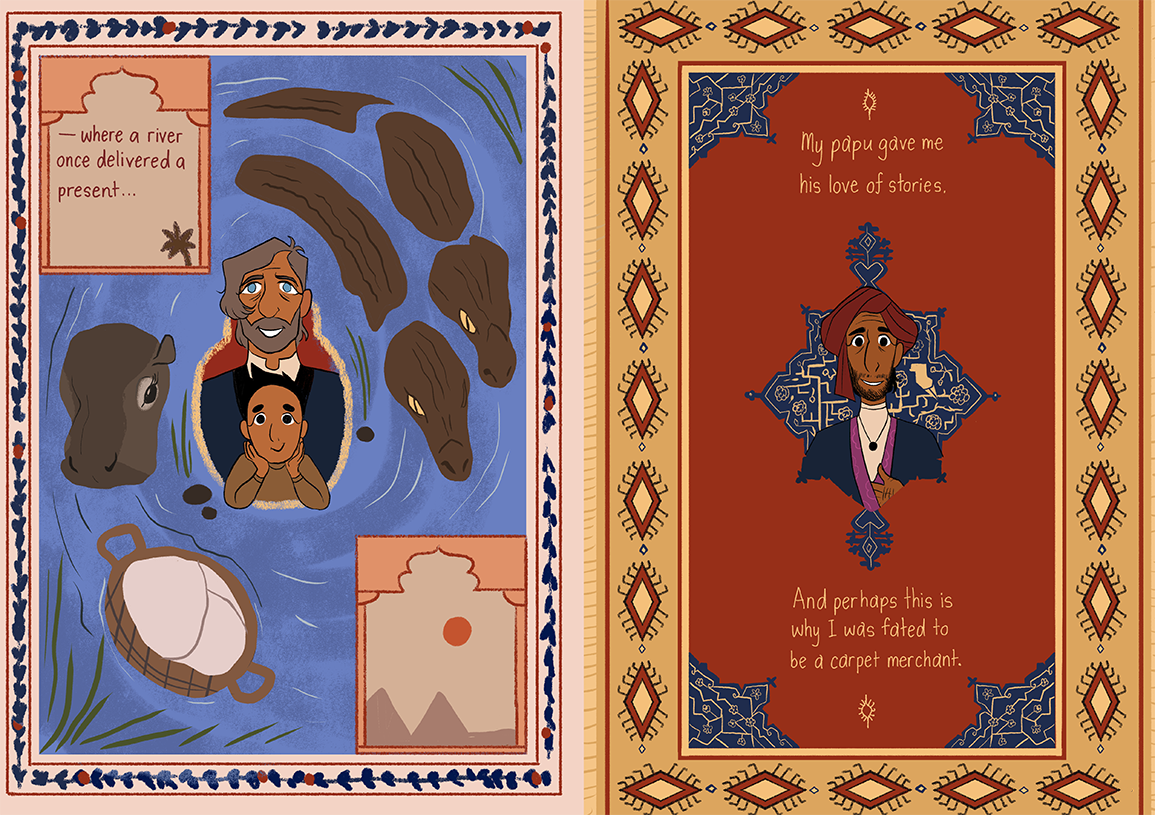 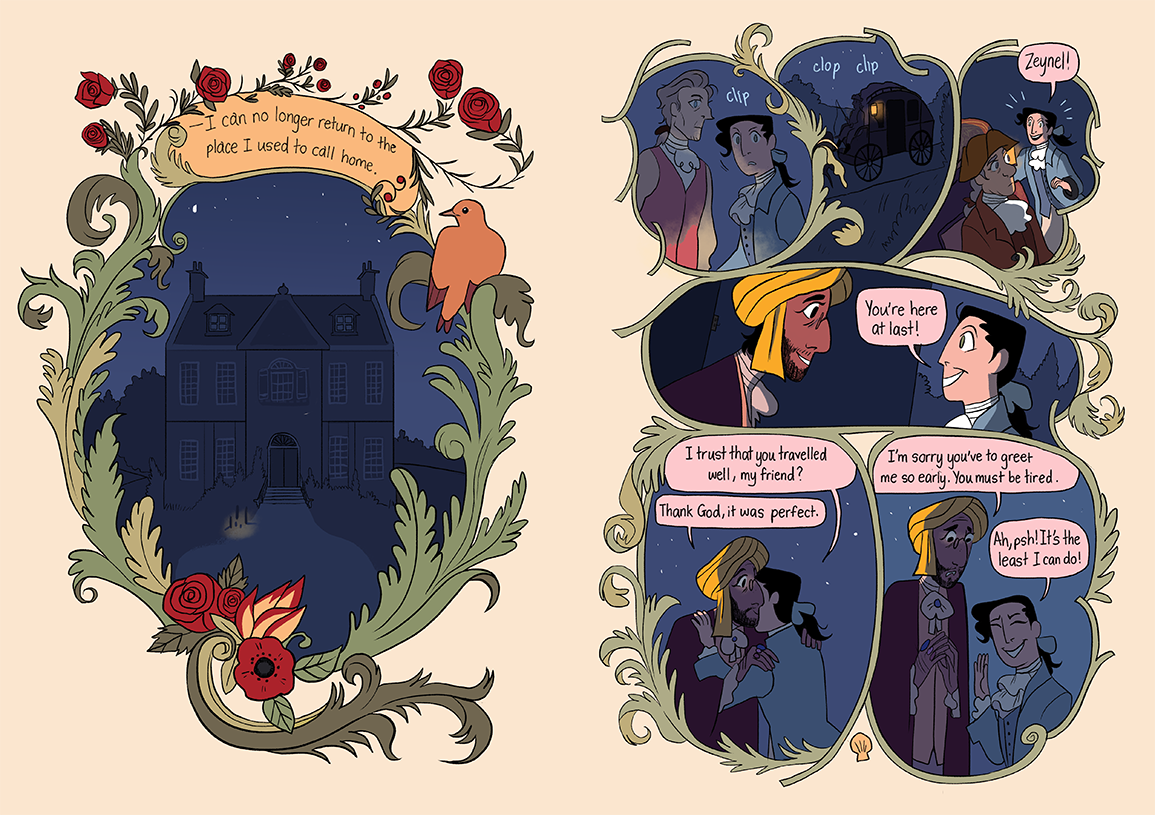 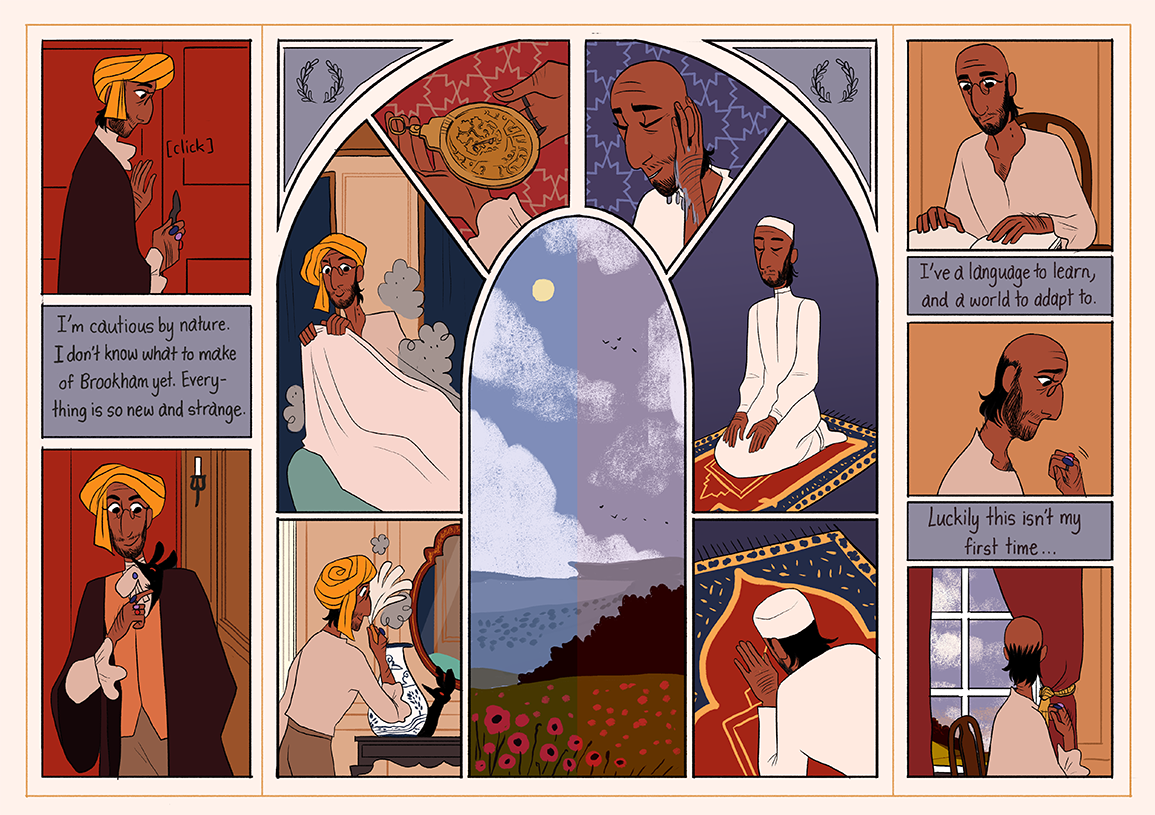 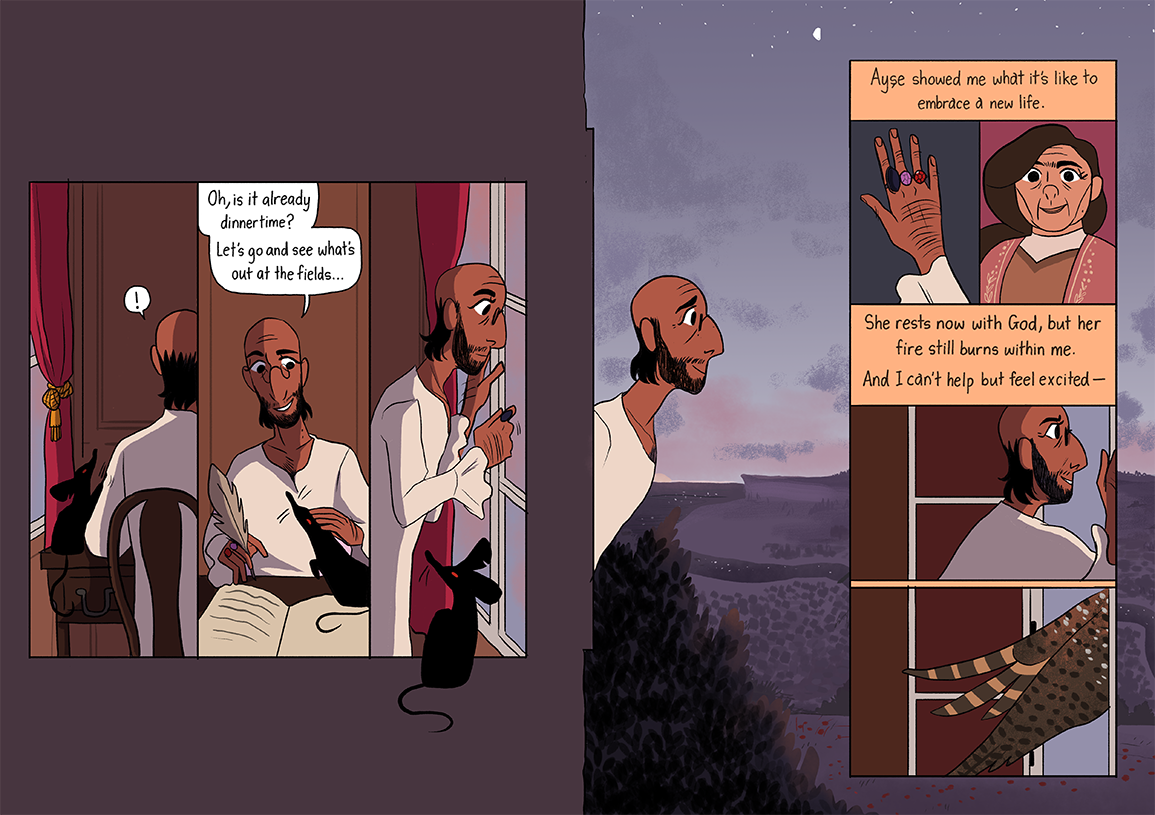 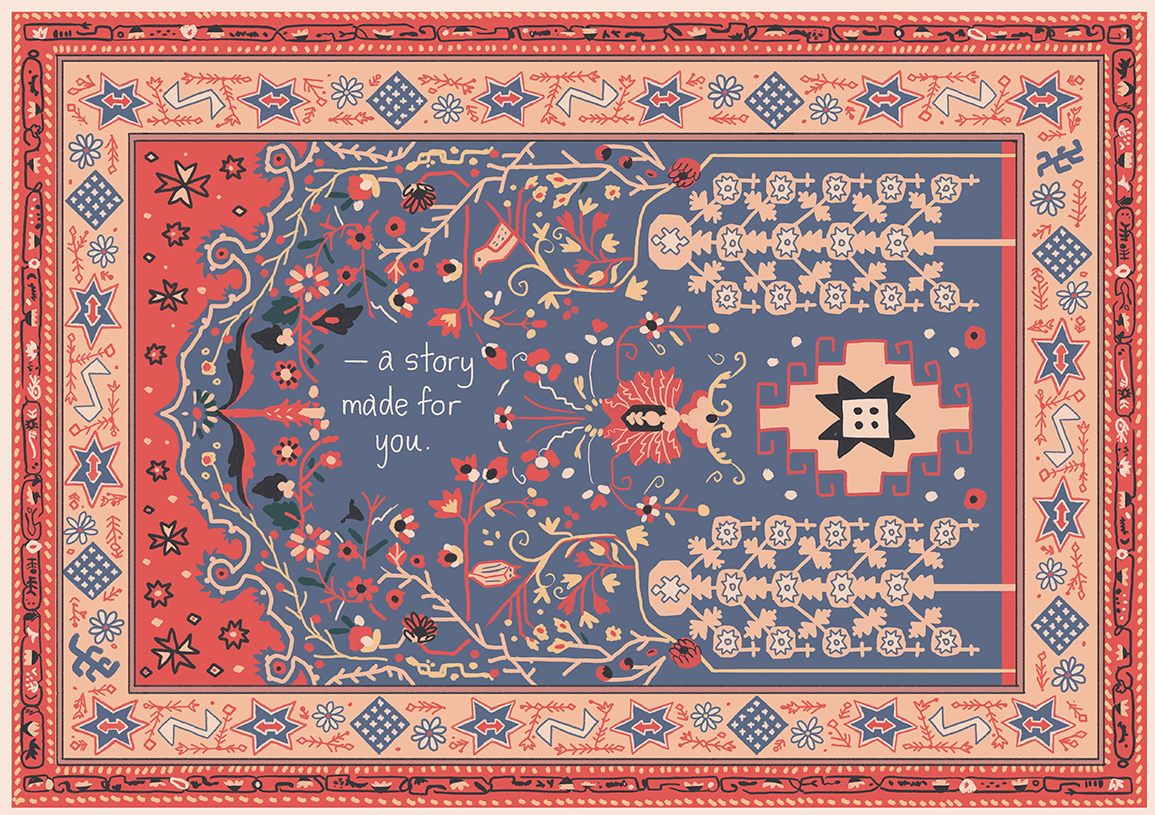 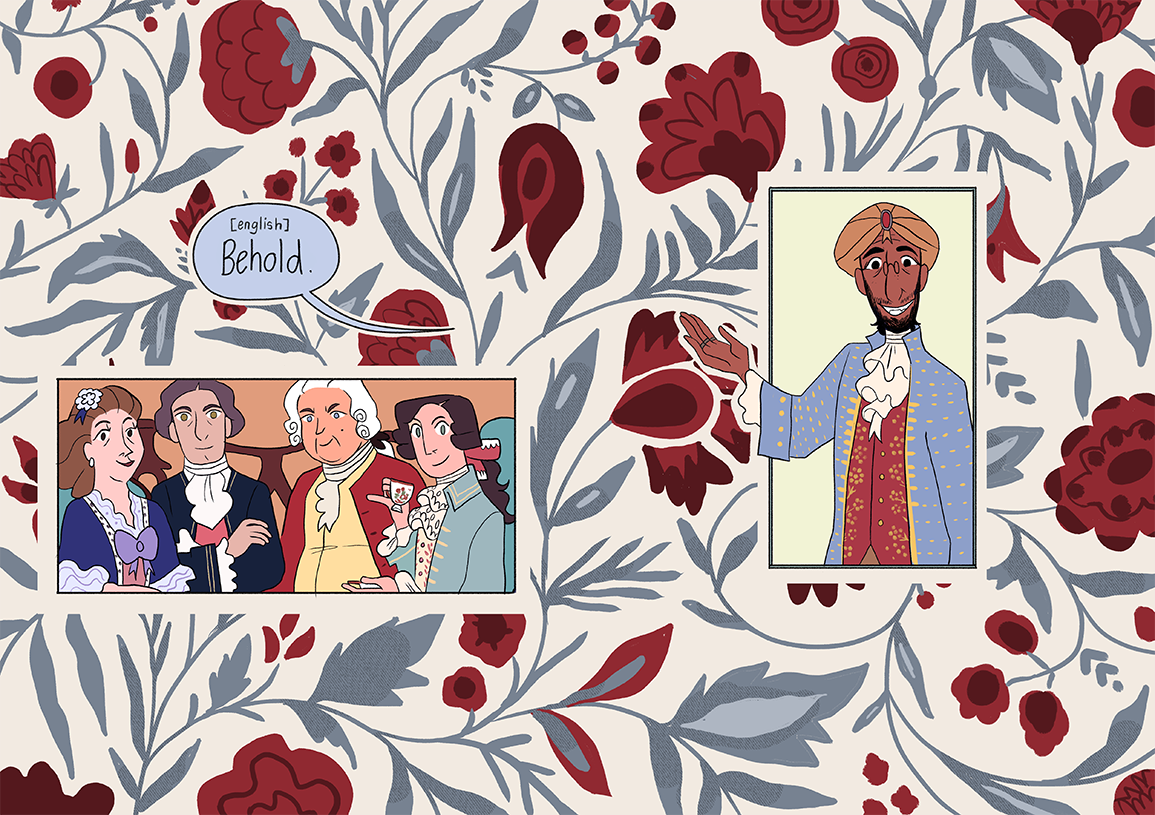 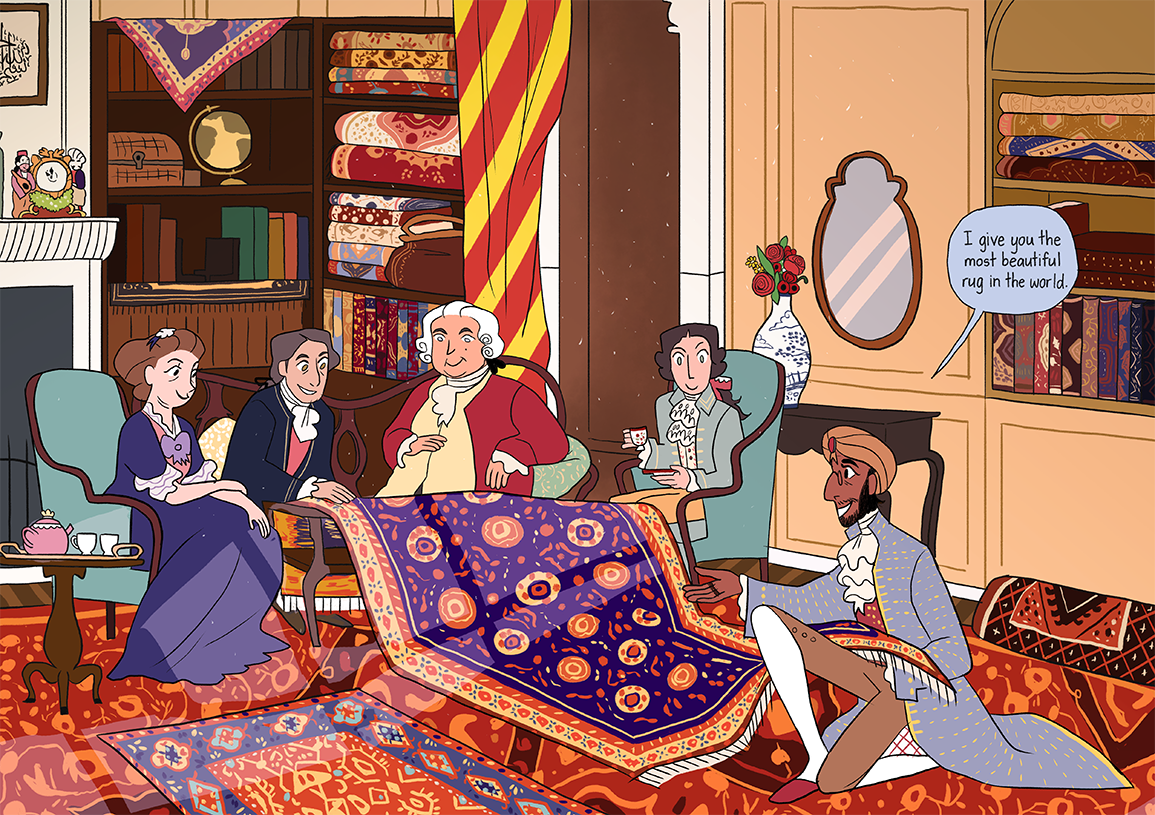 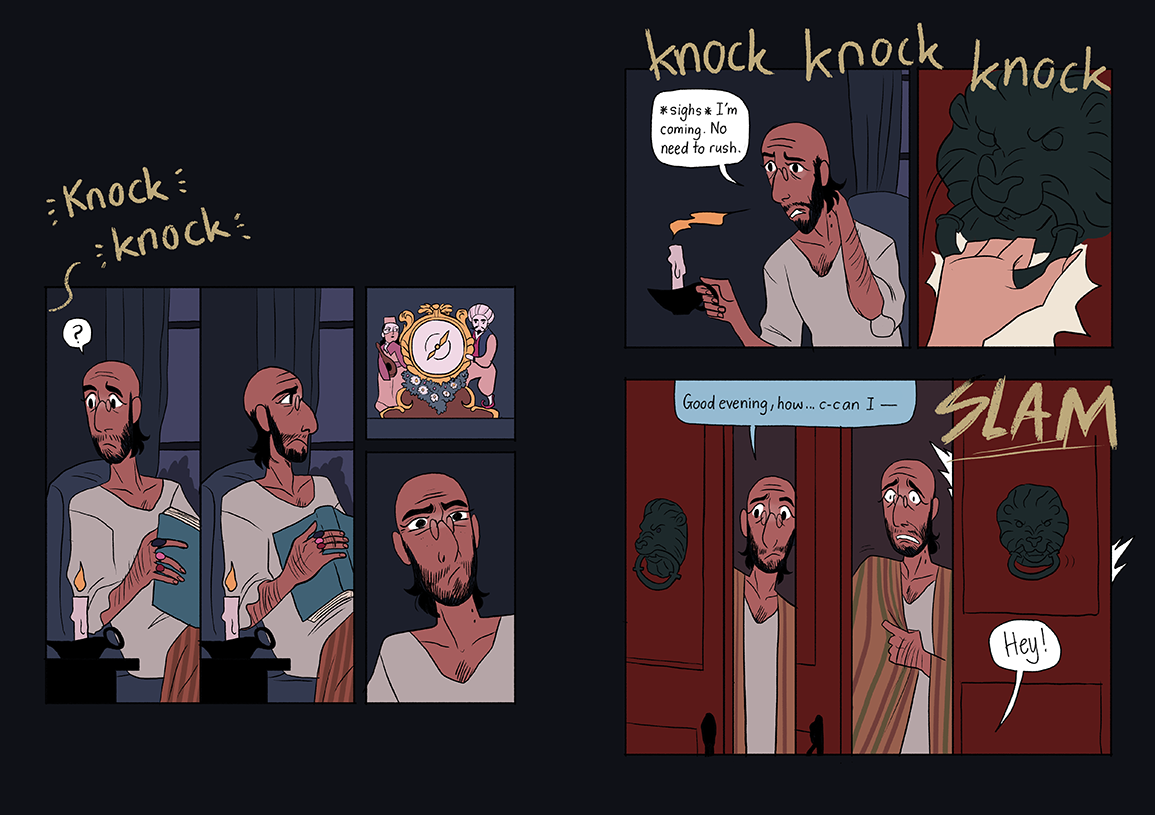 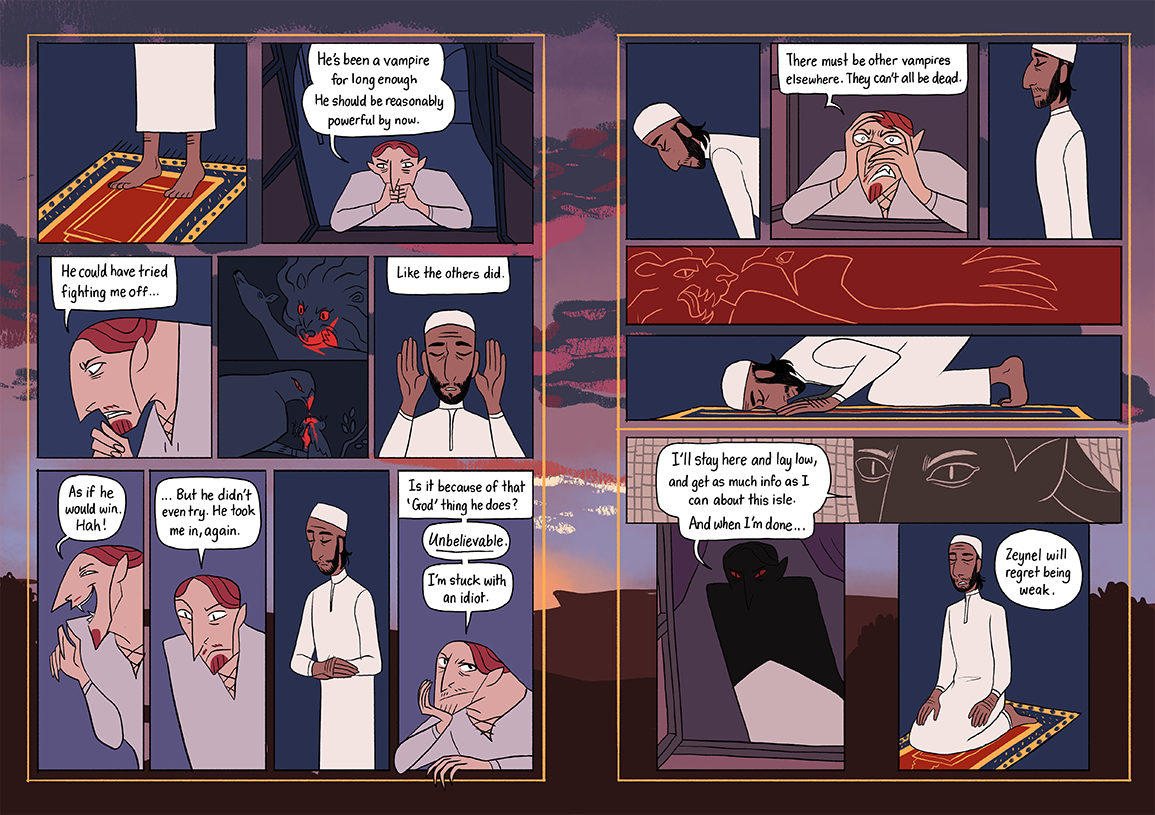 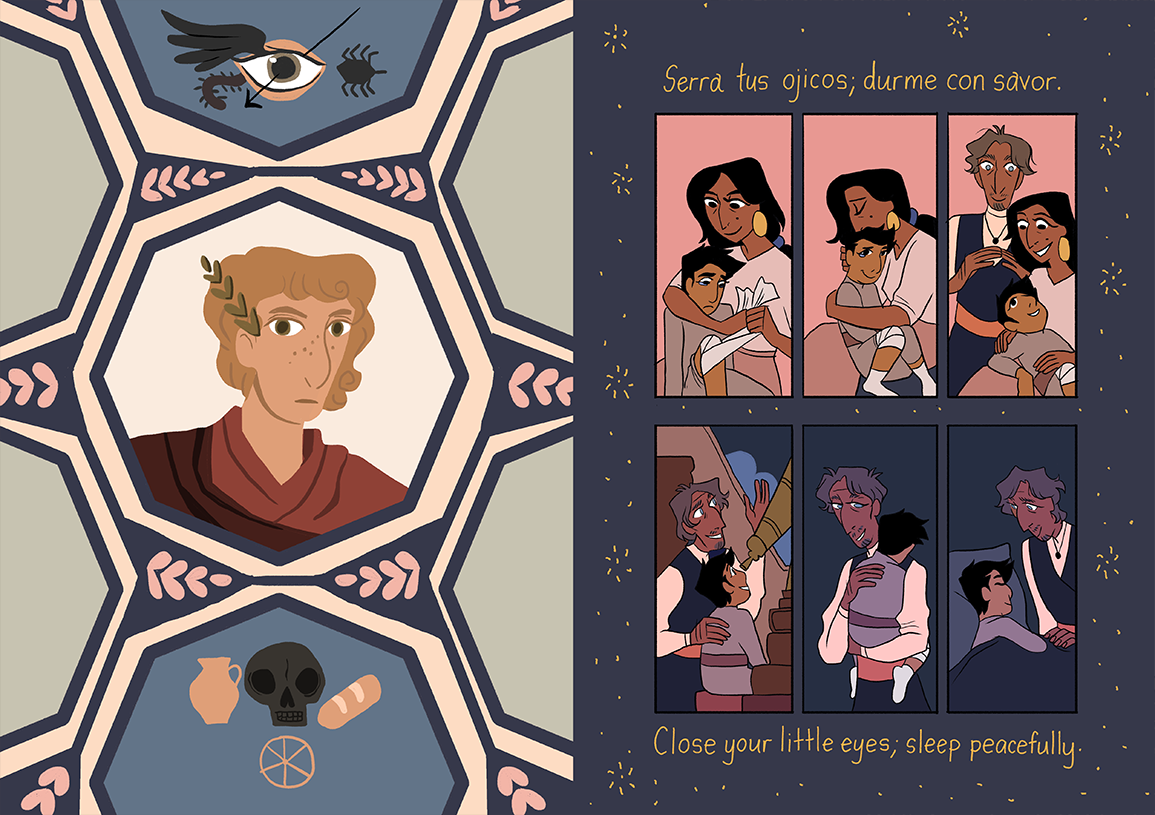 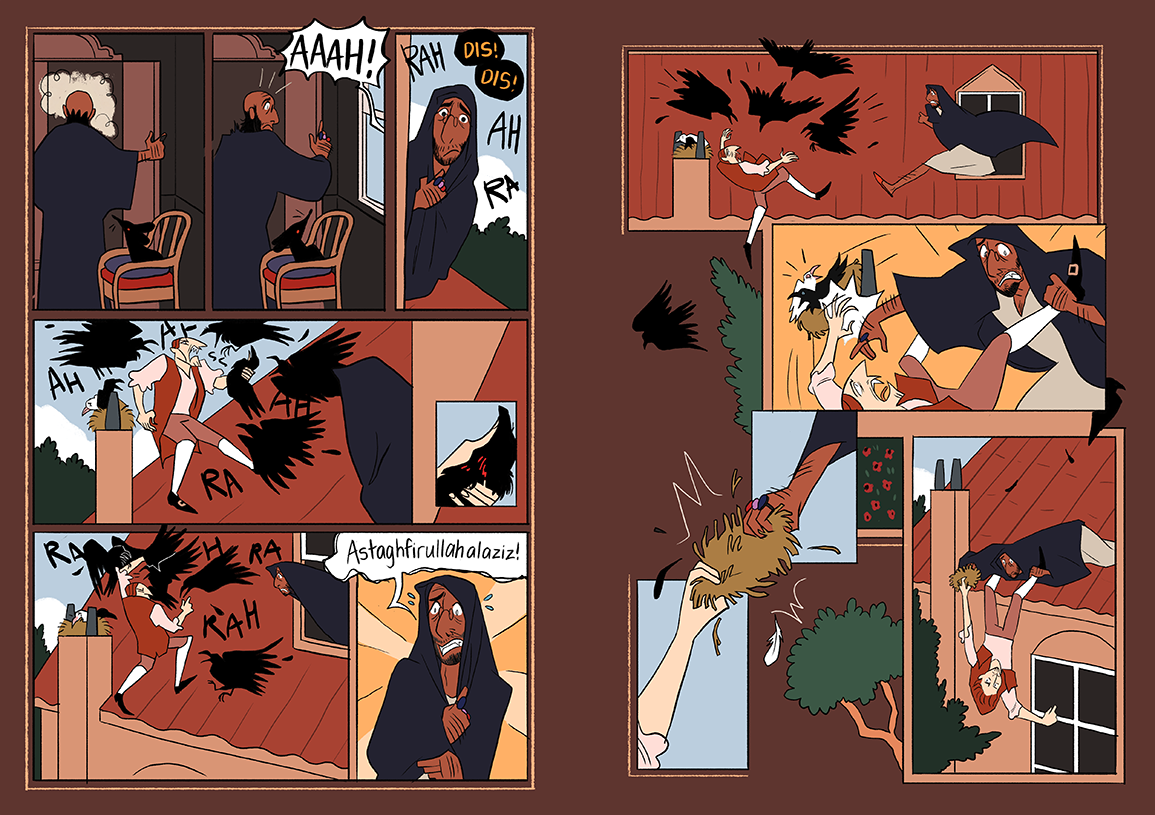 The Carpet Merchant is in essence a love story - love between a married couple, love with one's family, and love for and from God. It also features positive representation (a gentle hero, a powerful heroine, and plenty of side characters), and weaves several core Turkish themes - love, compassion, endurance, gentleness and the concept of qadar - not commonly recognised in media, particularly comics.

The story is technically a Gothic romance, but it jabs back at the origins of the literary vampire, which was a consequence of the Romantic Orientalist movement (English poets borrowed Eastern folklore to write fiction that evoked the 'exotic', following the success of the French and English translations of The Arabian Nights), beginning from Southey's Thalaba the Destroyer, Byron's The Giaour, and up to Stoker's Dracula. The vampire in traditional Gothic fiction represented the Other, eventually transforming into the foreign invader during the late Victorian era. But looking deeper, one wonders: who is the real vampire? Is it Dracula, or the Englishmen - who took his name, his history, and turned him into a villain?

It's also a story about storytelling - in books, folklore, songs, and even carpets. These stories are often made and passed on out of love, much like beloved memories are, and this love is the foundation of a person. Zeynel grows to discover the healing power of storytelling (of love, of love, of love) in the face of grief and loss.

Reimena Yee is a Malaysian illustrator, writer and designer, born in the dusty metropolis of Kuala Lumpur. Once a student in STEM, she quit an aspiration for academia to pursue a career telling stories. When she is not busy engaging in freelance and co-running the UNNAMED Southeast Asian comics collective, she is the author of several upcoming graphic novels.

The Carpet Merchant of Konstantiniyya is her first full-length completed graphic novel. In 2018, it was nominated for an Eisner Award for Best Digital Comic. In 2019, it was a finalist for the Dwayne Mcduffie Award for Diversity in Comics.

Is this a free webcomic? If so, where can I read it?

The Carpet Merchant started life as part of a larger webcomic, so it'll always be free to read. I've created ebook versions of the original manuscript that can be downloaded from my itch.io page, which you can read with ease on your laptop or mobile device. If you want the final edition (with nicer art, fixed dialogue and better lettering, in the physical form it was intended for), see the next question.

Where can I buy a physical copy of each volume of The Carpet Merchant?

Both volumes are available at all bookstores and libraries!

Are you Turkish and/or Muslim?

It is awkward to see how common this question is, despite being upfront about my identity. No, I'm neither Turkish or Muslim. I'm Malaysian, raised in a  multicultural, multiracial, Muslim-dominant country.

Why did you make this book? What gave you the inspiration? How did it come about?

Whenever I'm asked this question I always get the feeling people are expecting something grand. Like I intended to make this story all along. The truth is it's the most mundane point A to Z ever.

When I was 15, I created The World in Deeper Inspection, a large-scale concept about a Jersey Devil detective solving whodunnits and fixing other spooky people's problems. One of the important secondary characters in this story is Zeynel. I came up with his character in the way all naive teenagers did, in that he is a vampire who happens to be Turkish, he is not-overtly pious, he is chill, I thought he is cool. Hooray! I got an OC (original character)! There was no real reason behind his characterisation.

Fast forward 5 years later, after The World in Deeper Inspection became a real webcomic, I reached a point in the narrative when I had to present Zeynel's backstory in order for the following chapters to make sense. Only then, as a more aware 20 years old did I realise the magnitude of that naive, innocent decision. Oh my god! What have I brought unto myself?

At that stage I couldn't change his race, culture or name. He was already an established character in TWIDI. Plus, I felt it was, and still is, icky and disrespectful to consider even the idea of rebooting him into another (so-called safer) body. So what else could I do? I had to take responsibility as a storyteller and try my best to do Zeynel justice — in the sense that he won't be seen as a stand-in or stereotype of a Turkish Muslim, but as a fully-realised person who has his family, his faith, his insecurities and dreams and personal values included as part of his identity. (I refrain from saying if I accomplished this, as that's not my call. I acknowledge that despite my best efforts at research and good faith intentions I do have blindspots and will definitely miss some things. Still, I stand by the fact that I love Zeynel deeply, as a mother does.)

The moment when I consciously chose to assert responsibility of my storytelling was when the mundane point A to Z veered off into... well, who knows what it is.

Over time, as I developed the plot and the characters, and went deeper into research, the backstory grew beyond the original purpose. What started as a simple 100 pages substory of a larger comic became a two volume 600 pages standalone epic. The Carpet Merchant grew organically in response to the research and the challenges of writing outside of one's lived identity.

Still, the core motivation that I brought over from TWIDI didn't change. I wanted to make a story using the things I was passionate about: history, art, gothic tropes, faith (not bound by a specific religion) in its mundane and complex beauty, and ambitious comics layout.

What is your opinion about the representation of POC in publishing? Ownvoices? Cultural appropriation?

As a POC from the global south, who is a minority in my own country, I think we're beginning to be at that place where POC should have started a long time ago. At least we're having the necessary conversations. We still have a long way to go though, because there still isn't enough of us, both front-facing and back-facing, to reflect the true diversity of our world (I mean this in an international, nearly 200 countries sense). This industry is still very white and very Westernised.

Regarding ownvoices, I've two opinions that aren't mutually exclusive: 1) It's important to give marginalised identities power to tell stories in their own voice, in their own terms, to be honest without self-censorship and microaggression 2) At the same time, it doesn't exclude anyone from exploring outside their own boundaries. By anyone, I also mean the marginalised. After all, fiction's Platonic ideal is to be a bridge between empathy and humanity.

Because of the way our society is, choosing to do (2) is not going to be a light decision. It means becoming actively responsible, learning about your own privileges, acknowledging power dynamics and understanding the space you uniquely occupy in said dynamic. Even if you're marginalised. Even if you're like me from a former colonial country. There are biases, assumptions and schemas inside your brain that need to be challenged, revised, reconsidered. It's a journey that continues past the last page and into your next book, even if that book is different.

Do your research. Never accept yourself as having reach the ultimate stage of wokeness. You always have something to learn. Revise, confront, argue with yourself. Consult. Respect. Finally, constantly amplify, support and acknowledge the voices that already exist.