Come, my child, sing sweetly a sonnet of pixies and demons.

And follow the violin, where yonder your deliverer awaits.

The World in Deeper Inspection is an ongoing webcomic about the life of a Jersey Devil detective and his friends in Victorian England, as they work together to bring peace to the souls of the recently deceased. Whether it’s recovering a lost head from the fae or finding the murderer, no case is impossible for Detective Grimsley to crack.

September 15th, 1839 - As the town prepares itself for the winter, a certain creature has taken advantage of dwindling daylight hours to arrange frequent visits across various districts; the first in Halifax, and subsequent sightings in Brickfields, La Rue and the village of Hanover. Could it be that Spring-Heeled Jack has found Brookham worthy to become his Brighton?

The Night is dangerous without friends (or at least, strangers who don't want to eat your face for dinner). The world after sundown is populated by beings who exist in the periphery of our daydreams and nightmares: vampires, ghouls, faeries, kelpies, giants, demons... While most do not care to make themselves known, except in the whispers of storytellers throughout millennia, the real knowledge of their existence is a well-guarded secret among the initiated. This protects both the human and the mysterium from causing harm, but unfortunately for any spirits who had recently left their bodies, confronting this new world presents a challenge.

Before you go into the Night, remember these faces, because they will make the difference between death and the afterlife. 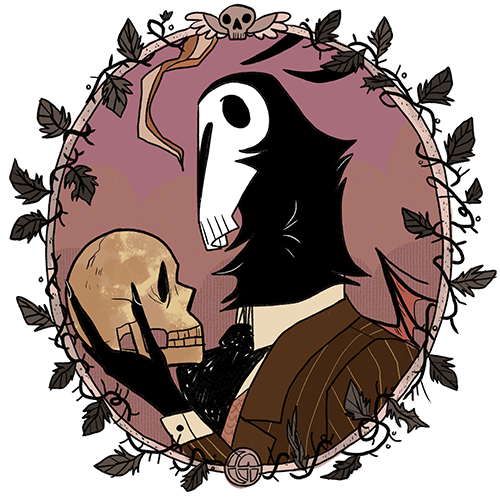 THE LIBRARY OF ALCOTT GRIMSLEY

Feel free to peruse the following comics, featuring some of Detective Grimsley's best cases, alongside the day-to-day occurrences and backstories of his friends and himself.

Chapter 1: When a Devil Solves a Murder

Detective Alcott B. Grimsley, specialist of spiritual matters, has just received a new case – in the form of a respectable-looking two-days dead zombie by the name of Mr. Brown, who wants Grimsley to find his murderer. As Grimsley travels deeper into the jaws of the forests of Western Brookham, his confidence is challenged, and he soon discovers the real killer (and victim) is not as he originally thought…

Tonight is the last burial of St. Victor’s Cemetery, and with it comes a new client: an old Irish man haunted by memories of Ireland, and the banshee who he believes can deliver him home. Grimsley attempts to find the banshee, with no luck, but he encounters a new friend on her way to Paris, and she seems to be more than who she claims to be.

Grimsley must help a young lady recover her missing head, but it won't be easy, not with his 'best friend' Convoy, who is hungry for both the detective's attention and a nice meaty dinner.

A dullahan's head is stolen by some fairies, and the detective Alcott Grimsley must trade something of equal value to get it back. Meanwhile, his friends Bronx, Zeynel, Catherine and Ilias discover fun and interesting ways to make a replacement head.

A Tour of Night.

Take a tour to discover the creatures and denizens of the Night, courtesy of Zeynel, co-author of The Ubiquitous Guide of Every Aspect of Night for the Recently-Deceased.

Read all of the comics, free on alcottgrimsley.com